Fear and Loathing in Madeira

Japan’s crappy science arguments were hysterically funny. They actually insisted on showing a power point presentation of the analysis of the contents of whale entrails during the lunch hour. The only research that Japanese whalers are conducting is product development and marketing of whale meat research. The current issue of New Scientist dismisses the credibility of this ridiculous ploy of scientific research whaling. In seeking to make fools of the rest of the world, the Japanese are making a laughing stock of themselves in the scientific community.

Last night, I had to laugh to see Icelandic whaling boss Khristjan Loftsson sitting in the lobby of the Pestana Casino Park Hotel with three other men sipping on a pink fruity drink with little apricot colored umbrellas.

The entire Icelandic whaling operation continues because of this one man and the reputation of an entire nation is being sullied in blood because of this man’s particular cetacidal perversion. His insistence on penetrating innocent whales with the exploding harpoon replacing his little penis is nothing short of pathetic.

Meanwhile some of the African and Caribbean delegates were making good use of the funds slipped into their pockets by the Japanese in exchange for their votes. It’s amusing to see whores spending money on whores and tossing chips onto the roulette table like confetti while smoking Cuban cigars, all under the pretence of regulating whaling.

The delegates to the IWC are divided into three camps. On one side are the barbaric whaling nations of Japan, Norway, Iceland, and Denmark with their entourage camp followers of paid-for third world rinky-dink nations that have prostituted their vote out to their Japanese puppet masters. On the other side are the diehard whale conservation nations led by Australia, the United States, Great Britain, and New Zealand. The third camp are the aboriginal “subsistence” hunters who tend to confuse and muck up the entire process with their insistence that murdering whales is part of their culture.

The only thing all three camps can and do agree with is to condemn Sea Shepherd and
once again the Japanese whaling delegation has ensured that the Sea Shepherd Conservation Society receives the maximum amount of attention at the annual meeting of the International Whaling Commission.

Dr. Sidney Holt wrote in the June 25th edition of Eco that:

“The IWC has just spent much time again, discussing the interaction between the Sea Shepherd Conservation Society (“the organization that they will not name”) and the Japanese whaling fleet in the Antarctic last season. What concerns me is the injustice of such discussions in which only one side is heard – that of the government of Japan. If the IWC Commissioners want to act as judges and turn Plenary sessions into a rump court then the very least they could do is hear Sea Shepherd’s version of events; Paul Watson is in Funchal; why not invite him in? The Japanese video is not definitive. I, with millions of others have seen the Sea Shepherd’s helicopter footage, showing a very different story. I don’t know who is right or wrong but the IWC judgments of one side of a serious legal controversy is lamentable.”

For the third year in a row, the Japanese whaling delegation have taken up the delegate’s time and tried their patience by forcing a motion onto the floor to condemn the Sea Shepherd Conservation Society. The motion is labeled “Safety at Sea” and accuses Sea Shepherd of being a threat to the safety of Japanese whalers.

This annual effort to condemn Sea Shepherd has only served to make us very visible in a meeting that we’re not allowed to participate in. The Sea Shepherd Conservation Society is the only organization in the world banned from attending the IWC meetings. It is an honor we are extremely proud of, and we are flattered that the Japanese recognize that we are a pain in their ass by constantly promoting us as their primary opposition.

The Japanese government spends an outrageous amount of time trying to discredit and damage the Sea Shepherd Conservation Society. They are telling governments that we are terrorists, yet they are not issuing any formal charges for fear of drawing more attention to their illegal whaling activities. They constantly try to bully other nations where our ships have been registered into taking our flag away from us. They have forced Canada, Belize, the Cayman Islands, and Great Britain to submit, but fortunately the Dutch don’t take their orders from Tokyo and we remain registered in the Netherlands. They tried to get us kicked out of the hotel where the IWC meeting is taking place and where we are registered guests, but they were foiled in that effort also.

It is comical watching the fifty or so Japanese delegates trying to avoid the Sea Shepherd crew. They refuse to walk through the lobby when we are there, they walk out of restaurants if we are there, and they tend to stay sequestered in their rooms, avoiding the bars, the casino, and the pool. They seem to feel comfortable only behind the security guards and the police in the restricted area where the conference is being held. It’s like they are not even at the hotel. It’s great fun watching them pretend that we are terrorists and their feigned expressions of fear in our presence.

The Japanese have argued that the IWC has no authority or competence to discuss small cetacean killing, to keep the subject of their mass dolphin slaughters off the agenda yet they are demanding that the IWC exercise authority and competence over marine safety issues of which none of the delegates have any experience, authority, or expertise.

When it comes to the issue of safety however, the Japanese would be well advised to get their crews trained in proper safety measures. So far they have had two devastating fires, oil spills, numerous injuries, and three deaths. The incompetence of the Japanese whaling fleet is staggeringly and lethally embarrassing.

Overall, the IWC displayed the same level of incompetence as they did last year. They made no real decisions on anything. Discussion on the Greenland request to murder 10 Humpback whales went back and forth with even Australia being rumored to support the killers. Remarkably, they agreed that climate change was a real problem and that whale watching was a profitable industry. In the end, no one could agree on anything of importance and the Humpbacks were tabled for further discussion for next year.

“We were looking for hair samples to determine mercury levels,” said Laurens de Groot of the Netherlands Sea Shepherd. “We could not find any elusive Japanese whalers to sample amongst the delegates and then we saw Australian Environment Minister Peter Garrett and realized that a hair sample was not always possible.”

After dropping a few million dollars into Madeira’s economy, the IWC ended it’s lock-down of the five star Pestana Casino Park Hotel and adjourned until next year’s scheduled meeting in Agadir, Morocco for another round of silliness, inaction, and subsidized holidays for third world bureaucrats.

All in all it was the typical Alice in Wonderland through the looking glass excursion into the dense and mysterious world of the International Weird and Wacky Whaling Commission where all is not what it seems, and reality is lost in an expensive haze of self-interested greed and anthropocentric arrogance.

Meanwhile, in the world’s oceans, the most highly evolved intelligence to have ever graced this planet swims in blissful ignorance of the fact that the most dangerous animal on the Earth continues to be obsessed with compulsive murderous desires and has been proven to be incapable of self control in ending the naturo-sociopathic addiction to senseless serial killing. 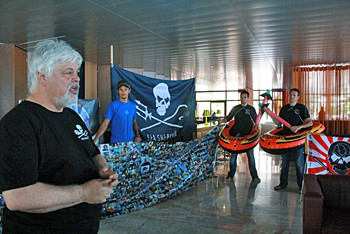 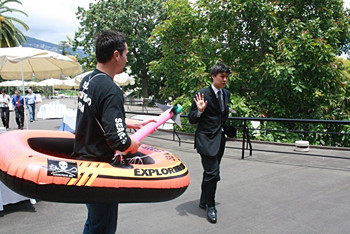