Faeroe Islands: The Graveyard of Shame

A few days after I left, Sea Shepherd sent another undercover operative, Peter Hammarstedt, to the Faeroes.  While in Klaskvik, Peter was able to document the dead bodies of the 236 slaughtered whales in such horrifying conditions that this particular grind was even criticized by the Faeroese themselves.

I was not expecting a grind to happen in Leynar’s bay, which was too narrow and close to more important bays. And yet, within 10 minutes of someone spotting from his window a group of whales that had appeared in the bay out of nowhere, the animals were driven to the beach. Within 7 minutes at the beach, they had all been slaughtered.

It happened so quickly that there was no time for the Golfo to intervene, but I wanted to know where all of the whale bodies wound up. So the next day, I went to shore with Lamya Essemlali, President of Sea Shepherd France and Grind Stop Campaign Leader. All of the village smelled like death; some pieces of meat were still there in garbage bags. Two trucks loaded up the remaining dead bodies and left. Without a car, we were unable to follow them. A fishermen was washing away the blood that was left on the ground. He asked us to follow him and showed us a whale’s head that was hanging from a rope at the entrance of the harbor. It was being used as vulgar bait. I felt revolted by this lack of respect. The next Sunday, at 5:00 in the morning, I was back onboard our small zodiac to dive and document what the Faeroese do with the bodies of the whales they have killed.

I wanted to find the place where they throw the rest of the bodies to find out if the Faeroese tradition of eating all the whales that are killed is actually respected. We tried in vain to gather information that would lead us to a hidden whale graveyard, but the secret was very well kept. 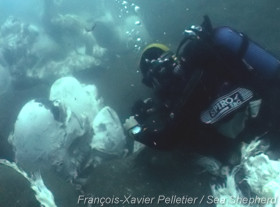 Fortunately, a bit of inference together with a strange and almost mystical inspiration drove me straight to that specific spot, where at 24 meters depth, inside a crevasse, was a centennial pilot whale graveyard. I felt nauseous. The bodies of the 86 pilot whales who had been killed on August 5 were piled there. Their heads danced with the current. They almost looked alive, and I had the strange feeling that they were crying for help. What happened to me down there was extremely strange. I knew no one on the surface would believe me, but I had the feeling I had entered a silent universe where the cetaceans cried out in despair.

The scene was distressing. Fetuses were mixed with entire adult bodies, and there were a lot of young whales, too. It was such a waste that even hunters would not tolerate it.

Back on board the Golfo, I was in shock and yet more determined than ever to fight until we have put an end to this apocalyptic, anti-traditional slaughter. An entire pilot whale’s body was floating next to our ship. How can anyone believe that the grind is still a necessity? This so-called tradition has become nothing more than a macho and bloody game that is meant to demonstrate one’s virility and impress the girls who watch on the beach. It is similar to bullfighting, and it is a shame for the Faeroese people, who can be so remarkable on other human, social, and even ecological issues.

In memory of an earlier time when the Faeroese had sunk my boat, flattened the four tires of my car, and thrown me in jail under the only accusation of filming the slaughter of pilot whales, I put a message into one of our acoustic devices that we left in the bay of Vagur where I was arrested.  It read: 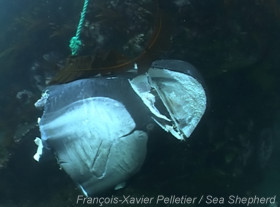 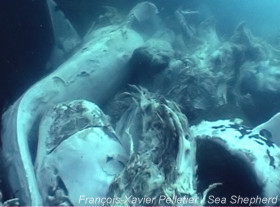 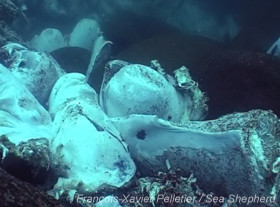 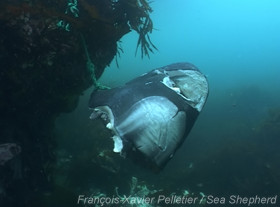