Any sea lion that has been observed eating even a single salmon is subject to being added to a “hit list” that can lead to the animal being killed.  NMFS has authorized the Oregon and Washington state sea lion killers to shoot or euthanize any California sea lions who match the following description: 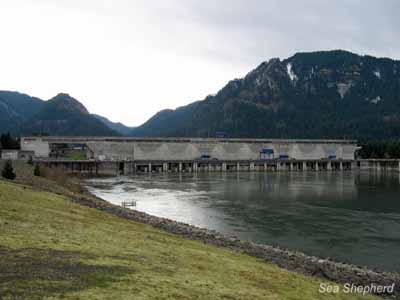 Who are the real predators here?  They may be mammals, but they certainly aren’t marine mammals!

On the Columbia River, a partnership between state and federal officials, and the commercial fishing industry spells certain death for sea lions who come between commercial, tribal, and recreational fishermen and “their” fish.  While State wildlife officials may be the ones who sear the flesh of sea lions with burning hot brands, pummel them with rubber bullets, and ultimately administer the fatal injection, these heinous acts have the stamp of approval of the federal government and are championed by many fishermen up and down the river.

Fishing is a huge industry in the Pacific Northwest.  A May 30, 2012, news release from the Oregon Department of Agriculture reports a harvest value exceeding $145 million for commercial seafood and fishing in 2011.  This was the single largest take in 23 years.  Per the report, salmon accounted for 2.4 million of the 285 million pounds of fish and shellfish landed by commercial fisheries in 2011.  This is just commercial fishing.  Recreational and tribal fishermen get their share, too.  A recent Columbia River regional fishing report in The Seattle Times documented 1,800 salmon boats on the lower Columbia over the Labor Day holiday weekend.  In just the first 3 days of September, The Times recorded “1,099 salmonid anglers (including 342 boats) with 279 adult and 24 jack fall Chinook, 12 steelhead, and 6 adult Coho. 278 (99%) of the adult Chinook, 10 (83%) of the steelhead, and 2 (33%) of the adult Coho were kept.” Clearly, killing sea lions, who kill far fewer fish than fisheries, is not about saving fish, but rather it is about eliminating the competition.

By way of comparison, a report from the U.S. Army Corps of Engineers says that salmon predation by California sea lions reached an all time low of 1,067 (.6% of the total run) from January to June 2012.  Consumption of endangered salmon and not-endangered sturgeon by federally protected Steller sea lions appears to be on the rise (.7% of the total run).  As such, Oregon, Washington, and Alaska have submitted a request to NOAA to remove Steller sea lions from the Endangered Species List.  Should that proposal move forward, it is just a matter of time before the Bonneville Dam sea lion killers add this species to their “to do” list.

“Even though the estimated amount of salmon killed by sea lions is the lowest since extensive observation started and dwarfs next to the numbers taken by fisherman or are killed by the dam itself, the immoral governments of Washington and Oregon are targeting a second threatened species of sea lion for senseless slaughter.  It is unacceptable that again and again in the USA and other parts of the world, animals are blamed for human-induced destruction and depletion and then subjected to 'managing' - the fashionable word for extermination."

Sea Shepherd fully supports the Humane Society’s efforts in court.  We will continue to monitor this situation as it unfolds.  In the event that the sea lion killers return to the Bonneville Dam in 2013, so will we.