Doublespeak from the Ministry of Death 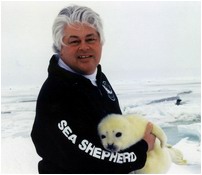 Silver Donald Cameron is one of Canada's most famous journalists and writes a column for the Halifax Sun Herald. He is a friend both to myself and to Sea Shepherd's Honorary Chairman Farley Mowat. As a Maritime-based newspaper columnist, Don is taking a courageous stand and Sea Shepherd is thankful for that.

As well as being a columnist for the Sunday Herald, Silver Donald is also the author of numerous books, most recently Sailing Away from Winter, an account of his voyage from Nova Scotia to the Bahamas. Check it out at www.silverdonaldcameron.ca

DOUBLESPEAK FROM THE MINISTRY OF DEATH

The dog's frantic barking told George Garneau and Rebecca Baker that there was something strange in their front yard in Thorburn one Sunday morning in early March. It was a baby seal - and it was five kilometres from the nearest salt water.

"He must have dragged himself along his belly through fields," Garneau told the Canadian Press. "He had to pass through forest and roads."

What do you do with a baby seal in your front yard? Garneau and Baker called the SPCA and other animal-welfare agencies, but couldn t reach anyone. So they herded him into a portable dog kennel, drove him to the nearest beach, and set him free.

"He seemed fine," said Garneau. "He was snarling and growling at us." When they released him, the seal hot-footed it across the ice towards the open water.

This couple did everything right. They tried to find expert help - but failed, because it was Sunday. They devised their own plan to help the seal, and carried it out successfully. The next sound should be general applause.

"Seals are protected under marine mammal regulations and so they are not to be harrassed or harmed," said Taylor ominously. "Fishery officers have laid charges in the past."

Got that? Assisting a stranded seal is harassment under the marine mammal regulations. For their compassion, Garneau and Baker are threatened with charges.

The minor outrage is the bureaucratic idiocy of that reaction. The far deeper outrage is that DFO officials have the bare-faced effrontery to talk as though their regulations served the welfare of wildlife. This is Orwellian double-speak. The objective of the Seal Protection Regulations has always been to ensure the efficient slaughter of large numbers of seals. Look it up on DFO's website. The regulations govern how many seals may be killed, and by what means - not more than 245,000 baby harp seals in 1971, for instance, and not with gaffs or small clubs, but with the wicked spiked clubs known as "hakapiks."

To call this "protection" is to sin against the English language - but the regulations moved on to sin against democracy and civil rights in 1977, when, as the DFO site coyly puts it,  In an effort to keep order and good management on the ice, observer permits [were first] required by all who wish to view the hunt. This innocent-sounding requirement was enacted primarily to ban Greenpeace and Brigitte Bardot from the ice floes. Under these regulations, DFO can require permits for anyone approaching seals on the ice - but it grants those permits to sealers, and not to protesters.

DFO's true objective was to stifle legitimate democratic protest. Earlier, Greenpeace had sprayed whitecoat seals with non-toxic green dye, making their pelts worthless, and Bardot had drawn the world's media to the ice, where they had filmed the whole gory horror that is the seal hunt - infant seals with their heads bashed in, blood spouting from their mouths and eyes; seals skinned alive; adult seals watching from breathing holes while their young were clubbed to death; streaks of blood like red driveways across the white ice where heaps of pelts had been dragged to the sealing ships.

I watched the carnage at The Front one spring myself, on the ice floes north of Newfoundland. It was the most nauseating thing I ever saw. And the result of all that vivid media coverage was an international outcry which ultimately ended the seal hunt - at least for a few years.

But the hunt resumed in the 1990s, and the regulations have become ever more draconian. In 2005, Paul Watson's Sea Shepherd Society took a dozen observers to the ice. When they attempted to film the slaughter, they were attacked by the sealers, arrested by the RCMP, charged under the Seal Protection Regulations, and fined $1000 each. Those who were not Canadian were barred from re-entering the country.

Watson himself was fined $3000 and banned from the seal hunt for two years. If he flouts the ban, he can be charged with criminal contempt, which allows the judge to throw the book at him.

And that's because Watson and his ilk genuinely want to protect seals.

DFO is the Ministry of Death. Its despotic, fork-tongued regulations exist to ensure that seals can be freely slaughtered without interference from protesters who are legitimately appalled that this country should host the world's largest slaughter of marine wildlife. That the regulations should be brandished at people like Garneau and Baker is contemptible. The very existence of those regulations stains the democratic credentials of this nation.