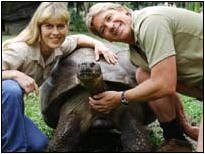 Last year, I was supposed to meet up with Steve Irwin in Sydney, but we both got side-tracked with our schedules and it did not happen.

He did communicate with us to lend his support to our efforts to stop illegal Japanese whaling in the waters of the Australian Antarctic Territory.

I do regret having not met him. He was probably the most visible international voice for wild animals and wilderness since Captain Jacques Cousteau.

Steve had his own unique way of speaking up for the animals. He was courageous, resourceful, energetic, controversial, and flamboyant. Kids loved him, the media loved him. Hell, even old John Howard loved him. He was one of the most beloved faces of Australia around the world.

Steve died doing what Steve loved to do. Those who dismissed his bravado as an act can now realize that he did indeed take risks. His life was about risks and his fearlessness was a vehicle that sent a message, especially to young people. He used the skills and talent he was born with to do exactly what those gifts were meant to do.

Steve was first and foremost a communicator and he was a great wildlife conservationist.

It was ironic that the government of Australia gave him quite a bit of trouble for filming whales in Antarctic, claiming that the Crocodile Hunter was harassing whales during the shooting of the film by getting to close to them. This is the same government that has refused to prosecute or intervene against the Japanese whalers killing thousands of whales in the very same area.

The Crocodile Hunter who loved crocs and other animals and lived to protect them will be sorely missed by millions of inspired children, and he will be missed by my crew and I.

Crikey Steve, you were great, Mate, and you have left us with a legacy that we shall never forget and a reminder that one person can make a real difference in the world.

Our condolences to his wife Terri and his 8-year-old daughter, Bindi, and toddler son, Bob. We weep with Australia for his loss.