Beauty is in the eye of the beholder they say. The Risso's dolphin is beautiful to me with its melon head and scarred pale bodies. Even without a beak there is a faint hint of the cursed dolphin smile. Besides age, beauty is the selection criteria when the dolphin brokers come in, when the drive has ended and the dolphins are lined up, stranded on the beach; a tarpaulin-covered slave market. Tarpaulin to hide what goes on from the Sea Shepherd volunteers on the cliff. The Cove Guardians, who care deeply about the lives and fates of these animals. We are the last to see these dolphins, before their death or life in captivity as a slave. Although we can't see the final act, we can hear.

When the handlers from the marine mammal concentration camps in Taiji have selected a few souls for a life of slavery, they have thereby condemned the rest of the pod to death and the slaughter starts. We can hear the splashing of the tails in the water and the explosive opening of the blowholes of the panicking animals until it ends. Especially on a windless day, this is a terrifying silence. The sound of no sound can be the most deafening of all. 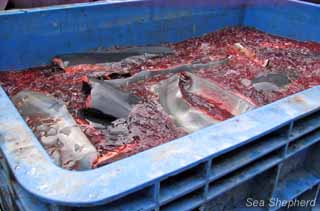 ...and after.Don't make the mistake of thinking this is an honorable tradition or a food culture we ought to respect. Don't assume that these are just poor fishermen trying to scrape out a living. This is a slave trade. This is about big money. Money paid by dolphin concentration camps from around the world for fresh dolphins, because most dolphins just don't last very long in captivity. Assets they gathered because people pay to visit these marine circuses to see the dolphin slaves do silly tricks in exchange for food. If you visit places like Sea World or participate in swim with captive dolphin programs, you keep this industry in business and the dolphin slave trade alive. The live dolphin trade makes the slaughter in Taiji possible and lucrative.

Last season the dolphins were killed by stabbing a metal rod in the direction of the spinal chord.. This paralyzes them, but does not always kill them. Every slaughter day we saw dolphins gasping for a desperate final breath while being towed by a rope around the tail to the butcher house, drowning on the way.

Risso's are top-of-the-food-chain predators, living off fish, octopus, squid, and krill. Although there are no population estimates and therefore nothing is known of their conservation status, they have been recorded from 60N to 60S and maintain a thick layer of blubber to stay warm in these cold waters. The combination of an end-of-the-food chain animal depending on blubber insulation is a critical one. The pollutants that we have been pumping into the air and waterways since the industrial revolution have a tendency to nestle in body fat and in higher concentrations, the higher on the food chain the animal is, the longer the animal lives. This is the root cause for one of the crimes committed in Taiji. The dolphin meat is cut up like beef, the blubber is fried, and both end up on the shelves of the supermarket and before, in school lunches. A government that lets its people be poisoned, be it out of ignorance or denial, is criminal.

Even though Sea Shepherd founder Paul Watson, Infinite Patience campaign coordinator Scott West ,and all the Cove Guardian volunteers have vowed to abide by Japanese law while in Japan, the authorities interpret what is lawful in their own way. A slave trainer's lie, police & prosecutor's incompetence, and an overall eagerness to have someone in Sea Shepherd colors in custody, lead eventually to a rare and embarrassing acquittal and payment for wrongful incarceration which went to support this year's Cove Guardian campaign.

Even though all supporters pay their own transportation, meals, and accommodations, there are costs for, rental cars, gas, radios and other communications, etc. So donations are welcome. Rest assured none of us spends a single dime in Taiji town itself.

Most of all we need you! We need level-headed, compassionate, courageous, dedicated people to be in Taiji on the ground. The more the better! Because we are making a difference! Not only are the numbers of dolphin killed down, more and more people are learning about Taiji and it's connection to marine parks worldwide. Under this influence and local pressure, some of these parks are closing in Europe and elsewhere. As in other campaigns, when we can't reach their hearts, we can still campaign the money out of their pockets. If they don't understand compassion, they might just understand economics.

Want to be a Cove Guardian? Write to us at: coveguardian@seashepherd.org