Charlie and the Hot-blooded Tuna Blues

The economics of extinction works like this: Corporations have taken over much of the fishing industry, and for these corporations it is a matter of short-term investment for short-term gain. Which in turn means maximizing profits in the short-term for the benefits of the shareholders by maximizing exploitation. In the case of the bluefin tuna, this means that the more bluefin caught and flash frozen in refrigerated warehouses or held in floating pens, the more the species will supply will decrease within its natural marine eco-system. Diminishment means scarcity, and scarcity plus demand translates into increased value of the fish in the warehouses and pens. If companies can stockpile enough bodies, and the fish is driven to commercial or biological extinction, the value of the bodies in their possession increases substantially. Thus, this fish that already sells for an average of $70,000 will inevitably double and triple in value within the next few years—unless we are successful in our efforts to protect it.

For years, bluefin fishing has been a bonanza, and like all bonanzas, the industry is on the threshold of crashing once it taps out the motherload. This is bad for the planet and local fishermen, but very good for the shareholders of the corporations raping the oceans and reaping the profits. They have no vested interest in the survival of the industry or the species. Their interest is in short-term profits that can be reinvested into other sectors ranging from electronics to entertainment to oil and gas exploration.

“Sorry Charlie” was a long-time promotional slogan used by an American tuna fish producer to promote the sales of canned tuna. It centered on a (seemingly disturbed and suicidal) tuna with low self-esteem named “Charlie” who was obsessed with being hooked, butchered, canned, and served to humans. No matter what Charlie did in his efforts at self-destruction, it was never good enough because they only slaughtered the best tuna, and Charlie was considered too inferior for the hooks. Charlie was always depicted as being a connoisseur of wine and food, books and the arts. In response to this, the tuna company would say, Sorry Charlie.  We don’t want tuna with good taste, we want tuna that taste good.” For some reason, this advertising campaign about one tuna’s desired to be hooked, mutilated, slain, and butchered was so popular that the term “Sorry Charlie” remains a part of American culture even today.

Well none of the tuna companies are saying “Sorry Charlie” any longer. Every warm-bodied fish in the sea is now in high demand, and each and every one of them has a price on its head of at least $70,000. In fact, some individual bluefin tuna have sold in the Japanese fish market for over $300,000!

The only official body in the world that holds responsibility for the protection of the bluefin is the International Commission for the Conservation of Atlantic Tuna (ICCAT), and this is a group composed of tuna fishing companies. On November 15, 2010, ICCAT met in Paris to set the 2011 quota. Against all scientific recommendations, ICCAT authorized the fishing season to take place from May 15 to June 15, 2011, right in the middle of the bluefin reproduction season and in their spawning grounds. Why? Because they are easier to catch at that place and time.

Sea Shepherd Conservation Society called for a quota of zero, while most other non-governmental organizations (NGOs) called for a maximum quota of no more than 6,000 tons. Yet, ICCAT set the quota at 12,900 tons. The quota has been gradually reduced each year because of the diminishment of the fish; last year’s quota was 13,500 tons. 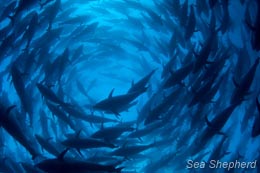 Sea Shepherd returned to the Mediterranean Sea again this year, and although we were successful in deterring and turning back attempts to set nets in the waters off Libya where all fishing was prohibited, we were frustrated by the inability to prove legality on operations elsewhere.

Simply put, ICCAT inspectors are a joke. We saw very little evidence of inspections, discovered numerous vessels without onboard inspectors, and one inspector communicating with us was unaware that we could hear fishermen in the background telling him what to say. They also were unaware that we had Arabic-speaking crewmembers. It came as no surprise to us that when we asked how many fish were in the cage, the inspector hesitated and then we heard the fishermen ‘informing him’ of how many fish were in the cage and that all of them were of legal size.

When we approached one group of boats and asked for the inspector onboard, we were assaulted by angry fishermen with slings and armed with stones and metal bolts. They began to pelt the Steve Irwin and our crew and they tried to foul our prop with a hawser. A strange response indeed from supposedly legal fishermen against a conservation group that only actively intervenes against illegal activities. We easily deterred them with a return fire of stink bombs and our water cannon. We stood by until an ICCAT inspector arrived. Immediately without inspecting the catch, the inspector declared that everything was legal and above board. Which left us wondering what all the hostility was about if they were indeed in legal compliance. They sure acted like they were hiding something.

You see ICCAT has a bluefin tuna recovery plan that allows for a 60% probability that the fish will recover in eight years, by 2020. As Sea Shepherd President Lamya Essemlali has said, “Would anyone get on an airplane that only had a 60% chance of reaching its destination without crashing?”

When Sea Shepherd first launched Operation Blue Rage in 2010, it was with the understanding that the fish would be listed as endangered and all we needed to do was to seek out and locate poachers. What we had not counted on was the poachers setting up a system where it would be impossible to determine if someone was a poacher or not.

We also found ourselves being accused of racism for trying to interfere with what the Japanese have referred to as their “food culture.”

In 2010, we inspected numerous cages filled with live tuna being towed back to holding pens in Malta, Libya, or Tunisia. They were for the most part protected by the French, Libyan, or Maltese navies and had ICCAT inspectors onboard as so-called proof that their activities were legal. Finally, we found one operation that did not have an inspector onboard and refused to produce any papers. So we cut the nets and freed about 800 of the trapped fish, much to the condemnation of everyone from Greenpeace to ICCAT. It seems only the local traditional fishermen of Malta supported our efforts, stating that this industry was destroying their traditional subsistence fishing operations.

In addition to illegal fishing, legal over-fishing, and pollution, the bluefin was also severely impacted by the BP oil spill that resulted in millions of gallons of toxic crude oil and dispersant being dumped into the Gulf of Mexico, the region where the bluefin spawn.

There should be a moratorium placed on the exploitation of all bluefin tuna to allow their numbers to recover. But with such an enormous price on their head, a moratorium seems unlikely. The fact is that unless a moratorium is imposed, the bluefin tuna will become extinct. As a result of that completely avoidable extinction, several things will happen: The world will be deprived of one of the most unique fish in the sea; the price of the fish in the warehouses will increase rapidly; the companies and the sushi restaurants will reap the short-term benefits from diminishment; the fishermen will be out of work and likely blame conservationists for their unemployment; ocean eco-systems will become even more our of balance; and the so-called human “food culture” will choose some other species to drag onto their plates and eradicate as they defend their merciless slaughter with accusations of racism against anyone trying to protect it.

Sorry Charlie, but it appears that tuna are just too damn valuable to survive.