The sailboat was repainted in the official colors of Sea Shepherd’s fleet, and its sail was turned into a giant Jolly Roger. The Italian Director of Sea Shepherd, Andrea Morello, the Italian Northeast Area coordinator, Stefano Are, and other hard-working volunteers did an excellent job of presenting the vessel as a worthy member of the Sea Shepherd fleet, with the task of spreading awareness and focusing attention on the Mediterranean front.

During the event, the Jolly Roger flew on the flagpole of the Venetian Sailing Club while Captain Hammarstedt addressed a very enthusiastic crowd of supporters. To conclude his speech and in flawless Italian, he said: "Ti battezzo Sea Shepherd Italia,” which means “I christen you, Sea Shepherd Italy,” at which time he hit the ship’s hull with a bottle of Italian sparkling wine.

After the launch ceremony, an historic Venetian boat called “Topo” (“Mouse”) celebrated Captain Hammarstedt’s and Sea Shepherd’s visit by carrying the Captain back to the mainland through the Venetian canals to the city’s celebrated center and its "calli,” the traditional name for the streets of Venice.

Sea Shepherd Italy, the City of Venice, the Venetian Sailing Club, and all the Italian volunteers and supporters of Sea Shepherd stand in support of Sea Shepherd and Captain Paul Watson at this time, and proudly express their profound and sincere intention to remain steadfast in their loyalty to Captain Watson and to Sea Shepherd.

Sea Shepherd – Italy would like to thank Sea Shepherd headquarters for taking part in this memorable event.  The visit will remain in the hearts and minds of anyone who had the great honor to live them and share them.  We look forward to our new vessel, Sea Shepherd Italia, being a grand Ambassador in the Mediterranean in defense of marine wildlife! 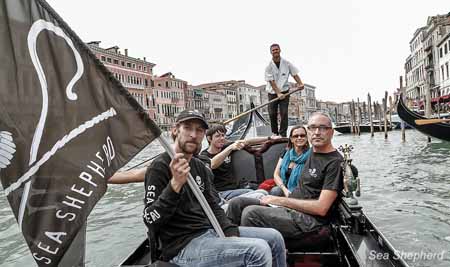 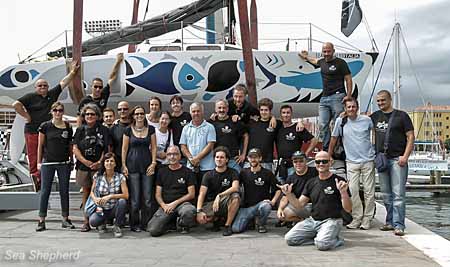