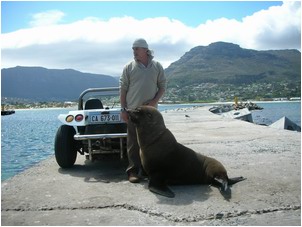 My visit to South Africa was brief but successful. I was there to attend the Hermanus Whale Festival in Hermanus in the Western Cape where I gave three presentations and a lengthy interview with the television program Carte Blanche.

While in South Africa I met with Francois Hugo of Seal Alert to discuss our cooperative efforts to protect South African fur seals and how Sea Shepherd can provide him with more support in his efforts to rescue and rehabilitate seals and to oppose the illegal killing of seals by fishermen.

Seeing Francois with the seals was enlightening. The seals that he has helped recognize him and come to him. They obviously know who he is and feel safe with him. Francois has been struggling with the support of his wife and a few people like Herbert Henrich to help the seals. Recently, he was rebuffed by IFAW when he asked them for support to place a platform in the bay to enable him to care for the seals better.

I also did interviews for the Cape Argus newspaper and for the Independent newspaper and met with numerous people to discuss the establishment of Sea Shepherd Conservation Society in South Africa. 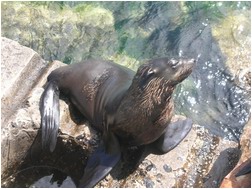 There is definitely a need for Sea Shepherd in South Africa. We would like to increase our efforts to assist Francois Hugo and Seal Alert and we need to monitor the South African government's attitude towards the whales. There are definite signs that South Africa is moving towards the possible resumption of whaling and the recent announcement of a proposed elephant "cull" forebodes bad news for wildlife in South Africa.

I am very grateful to Herbert and his family for sponsoring this trip. My appreciation also goes to the Hermanus Whale Festival for inviting me to speak. I am thankful for the Pelagus House Hotel in Hermanus for providing accommodation for me in Hermanus during the talk and to Southern Right Whale Watch Tours for allowing me to observe their whale-watching activities with the Southern Right whales. I was impressed with their respect for maintaining a distance from the whales and for allowing the whales to make the decision about approaching the vessel. 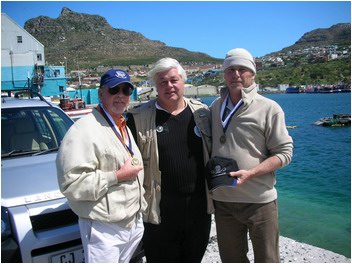 On Monday, September 26, 2005, Captain Paul Watson presented the Sea Shepherd Medal for Courage and Dedication in the cause of Marine Wildlife Conservation to Francois Hugo of Seal Alert and to Sea Shepherd Advisory Board member Herbert Henrich.

Francois Hugo has dedicated years of his life to rescuing and rehabilitating South African Fur seals. He works out of Hout Bay, not far from Capetown.

Francois is nothing if not passionate. He is an outspoken critic of the enemies of the seals and is tireless in his efforts to rescue and rehabilitate sick, wounded, and distressed seals. In truth, Francois is the voice of the South African fur seals and is their ambassador to the world of humanity. 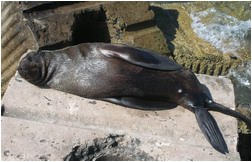 In the spirit of Diane Fossey he irritates many people, enrages others, and is quick to attack those who harm the seals and bureaucrats who obstruct his efforts to help the seals.

Francois Hugo exemplifies the spirit that Sea Shepherd encourages for individual initiative and courage in defense of marine wildlife.