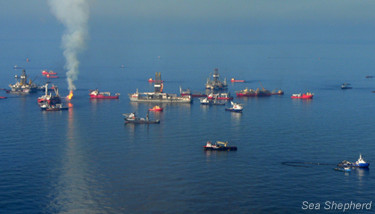 What has happened in the Gulf over the last 365 days is a scandal, a horrendous crime and a blatant proclamation by the oil companies that they can do whatever they wish, whenever they wish, to whomever they wish, without any worry of serious consequences.

One year on, BP is making record profits and doing very little to address the damages they have caused. Instead they are leaving the dirty work to non-governmental organizations and local governments.

The Obama administration having been bought and paid for by BP has capitulated to the oil industry and continues to issue drilling leases in the Gulf to oil development, including the serial spilling criminal corporation called BP.

Dolphins, whales, sea turtles, seabirds, millions of fish, billions of invertebrates have been poisoned and are either dying or have already perished. This oil and the insidious dispersants that BP has spewed into the Gulf amount to a massive lethal assault on the living eco-systems of the Gulf of Mexico.

Yet the killers, these monsters of greed and arrogance continue with their crimes.Why? Because our global societies are addicted to this black toxic drug called “oil.”

All of us are guilty. We are all addicts and the pushers are the oil companies.

I do not wish to sound holier than thou with this commentary. Sea Shepherd ships burn diesel fuel and we use lubricating and hydraulic oil. My name is Paul Watson and I am addicted to oil and as an addict, I desperately wish to find the means to make myself clean.

Unfortunately whalers, sealers, shark killers and other poachers use oil to kill, forcing us to use oil to save, but we remain addicts nonetheless.

This is nothing new. It began with the politics of whale oil in the 19th century and even brought about prohibition in 1917 when the oil companies realized that farmers could make their own fuel from apples.

Despite global warming and climate change, the drilling for oil will continue and when the reserves are exhausted in non-protected areas, the National Parks, coastlines and World Heritage sites around the world will be assaulted.

Oil has fueled wars, civil strife and ecological catastrophes and will continue to do so. Oil companies will continue to annihilate wildlife and pristine natural eco-systems with impunity because oil is the grease that manipulates and controls politicians worldwide.

The President of the United States serves the oil companies first, the people second and the environment last. As do all the leaders of every single nation on the planet.

All Presidents and Prime Ministers, Senators, Members of Parliament and Congressmen and women are subservient to the demands of the black toxic muck.

At least Donald Trump has the honesty to say that current American wars are fought for oil with human rights and democracy as a mask for our greed.

Our dependence on oil is a highly toxic, dirty and lethal addiction and it is destroying life and threatens the future of life on Earth more than any single substance.

Oil is death. And what do we do about it?

Above all, what we need is a new vision. I believe that passion, courage and imagination is the key to unlocking the impossible. We just need to find the will and the motivation to find the answers.