Broome has the Power to Cease the Dolphin Killings in Taiji

For The Cove Broome premier on August 15th, a dolphin ice sculpture out the front of the Sunset Cinemas greeted the patrons as they lined up to enter. 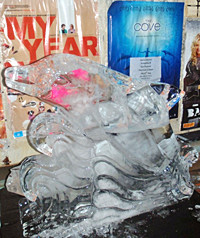 I have seen this film a number of times now, but tonight would be different because representatives from the film would be holding a Q & A session with the people of Broome and Councillor Chris Maher as the Master of Ceremonies. The close of the film was met with a deafening standing ovation from the audience.

The questions came thick and fast with the crowd wanting to know more about the effect of suspending the relationship and how they can achieve this through the shire Council.

I stood up to announce that in representing the Sea Shepherd Conservation Society, that if Broome choose to suspend the sister city relationship then they would receive the full support of many people around the world including the letters of support addressed to the Shire President Graeme Campbell.

I cited one letter in particular:

“I am really hopeful that once you and your fellow Councillors have viewed the irrefutable evidence contained in the film, and the complicity of the City officials and other authorities in Taiji with this inhumane activity, that you will review Broome’s relationship with Taiji.

You have in your hands the power to make a significant difference on a vital global issue.” 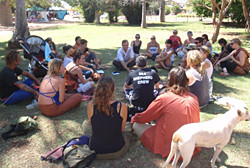 The following day, Cr Chris Maher and I met with over 30 Broome residents to discuss how the community of Broome can suspend the sister city relationship with Taiji.

Una Baker from Broome has stepped forward and is leading the charge in rallying the people of Broome to see this film and suspend their sister city relationship with Taiji. We have also armed Una with a petition addressed to the shire Council, which she is rapidly getting signatures in support of the suspension.

The Sea Shepherd Conservation Society will be supporting and assisting Una Baker in any means possible to continue to rally the people of Broome for the dolphins. We will never surrender until the killing stops!

Upon watching the film, Una Baker commented, “How can any resident of Broome watch this film and not want to suspend the relationship with Taiji? We are connected to our sister and therefore we are connected to this slaughter of these beautiful and highly intelligent beings. If the rest of the world is rallying to stop this slaughter, then it is Broom’s obligation as the sister to go above and beyond any means possible to shut this down for good!”

Broome simply has to decide. Does it support its sister in the slaughter of thousands of innocent dolphins every year?

Suspending a sister city relationship is something that has never been done before and there is no guarantee that this will end the slaughter, but suspending the relationship may just be the catalyst necessary.

The killing will begin again on September 1st, 2009 in Taiji and Broome has within its power a chance to help end this slaughter. Around 23,000 dolphins could be free to remain safely as the original surfers of the ocean if the world rallies for their defence.

That is something worth fighting for. If we can’t stop this slaughter of one of the most beautiful and intelligent animals on this planet, then there is no hope.

“You have in your hands the power to make a significant difference on a vital global issue.”
- The Hon. Ian G. Campbell

Australians, if you wish to show your encouragement towards Broome suspending their ties with Taiji until the killing stops, please let the Shire of Broome know your support so they can take the appropriate action.

Please address the email with :

Broome opening night for the Cove
Where: Sun Pictures Broome (www.sunpictures.com.au/)
When: Sunday 23rd August
Time: 6:30 pm onwards
Details: Screening of the award winning documentary, The Cove followed by information on how Broome can help stop this slaughter.