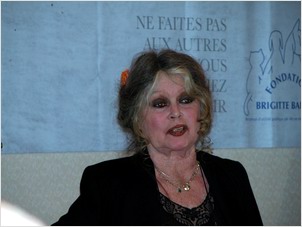 My trip to Ottawa, just one week ago to denounce the seal massacre, has gained the support of many Canadians.

However, I am both surprised and hurt to read some articles dragging me through the mud, making me seem crazy by attributing opinions to me that I have never held, and attempting to ridicule my actions using systematic misinformation.

It seems that my most fervent attackers, starting with the Canadian senator who spoke to the media to defame my actions by claiming that we use images of white seal pups to upset the public, were not present at the press conference organized by my Foundation.

The images presented at the conference were filmed in 2005 during last season's seal hunt. Those images are unbearably cruel and inhumane but they accurately reflect the actual conditions of the hunt. The Humane Society's team, who went to the ice floe to witness the killing this year, was stopped by the authorities... what a good example of the transparency. While the Canadian authorities recognize that it is impossible to control all of the hunting and 94 accusations were made against the fishermen in 2005... apparently by hiding the infractions committed this year, the number of convictions will probably be less...

Killing a seal by clubbing it when it is three weeks old rather than when it is ten days old does nothing to change the problem. It is important to see how this killing is organized and carried out, to see how the animals suffer when they are left agonizing for several minutes, drowning in their own blood... to do nothing to stop it is unacceptable, cowardly and reprehensible!

To justify this massacre because it affects a species that is not yet threatened by extinction is heresy. Is it necessary to wait until the effects are irreversible to react?

Seals, like all marine mammals, are directly threatened by global warming. To add to this serious phenomenon the disproportionate hunting quotas is an aberration.

These animals have their place on our planet and they are an integral part of our ecosystem. The minister of fishing and oceans recognizes that the seals do not represent a threat to the cod populations who fall victim to commercial fishing, their poor physical condition, their low growth rate and environmental changes.

Finally, I would like to say again that I was never opposed to seal hunting by Inuits or other populations who directly depend on hunting and fishing for survival, no. I firmly condemn industrial hunting and the markets for seal fur, fat, and genitalia sold as a psuedo-aphrodisiac in Asian markets.

It is no longer possible to accept the unacceptable under the cover of "tradition" and "culture", either way, I do not accept it. That is why I fight and will fight until my very last breath against seal hunting, bullfighting, the fur market, force feeding geese, eating horse meat and all of these despicable "traditions"!

I beg Canadians to listen to this appeal that comes from the heart and from reason. Do not be deaf, dumb and blind to the seal massacre. You must condemn this atrocity with strength in numbers and courage. You have the power to end this. It is your responsibility.