It was a savage, merciless coldblooded massacre directed by a man whose passion for slaughter is equaled only by his incompetence as a civil servant.

This bloodthirsty tyrant ordered rescuers forcibly removed from the beach as the rifles blasted the helpless whales. Before the cameras of the South African media, the compassionate volunteers were dragged and bullied from the scene of horrific carnage and threatened with arrest if they defied his orders to remove themselves.

Meyers simply called himself a scientist and proclaimed the animals doomed, and thus gave the order for execution. This man does not possess a single scientific degree. He is a bureaucrat, not a scientist, not a vet, and not even a former student of marine biology or any discipline involving marine species. In short he is an unqualified sadistic thug and an embarrassment to the government and the people of South Africa.

Later in an interview, he said the decision was made through a consultative process but could not name one scientist that supported the execution of the whales.

This report from someone who was there on the beach and witnessed the MCM thugs executing the whales:

“Take a look at what happened on our beach!! About 55 whales beached and the authorities came and shot them in the afternoon. Hundreds of people were swimming them back in. I swam 6 back, some of mine made it. Mike Meyer from MCM decided to clean up the problem and shot about 40 of them. Absolute bloodbath. In front of a packed beach with volunteers still clinging onto them, or some swimming them away from the police. I can’t sleep, eat, or think. I still feel sick about it all. I know if an animal is dying we need to put him down, but they did not make a big enough effort. At 11 AM the front loaders were already there to dispose of the carcasses. The majority of the animals were still strong and fighting, but they said if we object, that law enforcement would take action.”

We need people to send e-mails to South Africa demanding the resignation of the Butcher of Kommetjie Beach.

Please send off an e-mail to: mmeyer@deat.gov.za 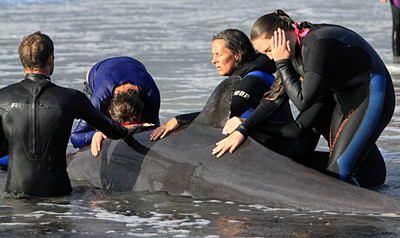 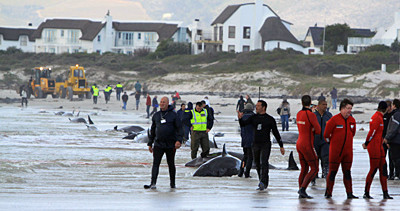