Another Sealer Bites the Dust

Another Sealer Bites the Dust 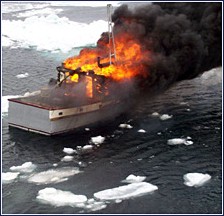 The Newfoundland sealing vessel Lacey May burst into flames and burned to the waterline some 37 kilometres off the coast of Newfoundland. All five seal killers were rescued by the coast guard after the men abandoned their boat and hopped onto an ice floe.

About the same time a 15 metre sealing vessel the B S Venture ran onto the rocks on the coast of Newfoundland. Apparently their engine broke down, they lost power, and went up on the rocks. Now that was a sight for a poor seal's eyes.

Two weeks ago the sealing boat L'Acadien II capsized while being towed through the ice by the Canadian Coast Guard icebreaker Sir William Alexander. Four men died in that tragedy.

That was not the first time this bizarre accident has happened. In 1997, the Newfoundland sealing boat Angela and Brother's flipped and sank while being towed by the Coast Guard ice-breaker Sir Humphrey Gilbert.

Sealing vessels were crushed and sunk last year in thick ice and numerous vessels have been damaged again this year.

Not that the sealers care. The government of Canada is always ready to pay compensation for losses just as they subsidize the slaughter with surveillance to locate seals, they break the ice to allow access to the seals and they march around the world trying to drum up markets for seal products ranging from seal fur to powdered seal penis. Tax-payer founded purveyors of snake-oil sex potions and heavy metal laced seal oil "health" tablets. 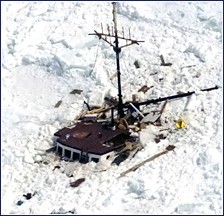 The seal slaughter is a glorified welfare scheme and the sealers nothing more than uneducated welfare bums seeking to practice their barbarous trade at the expense of Canadian tax-payers and Canada's reputation. All of this because Canadian Fisheries Minister Loyola Hearn is encouraging sealers to use flimsy non-ice class wooden and aluminum hulled vessels in extremely hazardous ice conditions. In their lust to kill seals the sealers are being encouraged by a man seeking to further his own political ambitions by declaring himself the champion of fishermen and the scourge of seals and seal defenders. After all, most Canadians did not elect Hearn, he only needs to keep the fishermen in Newfoundland happy to win re-election. He can ignore the concerns of all Canadians because only the sealing vote counts for him.

Meanwhile the ever hilariously hysterical Hearn is having his thugs tear apart the Sea Shepherd ship Farley Mowat looking for safety violations. It appears that a steel hulled, Norwegian built, ice class ship is suspected of not being safe to navigate the ice yet flimsy little boats are being blessed by the same Coast Guard and sent off to sea to be dashed on rocks, burnt or sunk by the Coast Guard.

Meanwhile Hearn distracts the anger of the fishermen away from government incompetence by scape-goating seals and seal defenders. In his effort to harpoon all opposition to the barbaric sealing industry, Hearn has made a spectacle of himself, spouting off with juvenile schoolyard name-calling, shooting mis-information from the hip and sending his gun-toting henchmen onto a foreign registered yacht in international waters and then bold faced lying about it, obviously completely ignorant of the fact that there is a device called GPS that can pinpoint the position of vessels to within a few metres anywhere in the world.

As sealing boats sink, get crushed in the ice, burn and smash themselves on the rocks, images of horrific cruelty are being published worldwide. The Sea Shepherd Conservation Society's campaign to defend the seals has been an enormous success and everything has gone better than planned as we take the battle off the ice for now and into the courtrooms.