It was a real pleasure and an honor meeting a truly international Sea Shepherd mission team, including representatives from the United Kingdom, Australia, The United States, and South Africa. The crazy thing is that here was a bunch of foreigners trying to teach the Namibian people to look after one of their national treasures – the seal colonies. Instead, we soon found ourselves labelled as a “threat to national security” by the Namibian press. 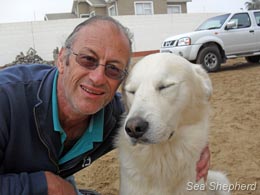 A friendly dog pays Sea Shepherd a visit in Namibia. Photo: Sea ShepherdThe seal cull that takes place here is more barbaric than any because Namibia is the only country in the world that allows nursing seal pups to be clubbed to death. Milk can literally be seen dripping out of the mouths of some of the freshly killed seal pups. The cull takes place in the early morning. The animals are then quickly removed from the beach and bloodstains are instantly covered with sand in an effort by the authorities to cover up any telltale signs of the massacre. Soon, the tourists arrive, oblivious to what has just taken place, except for the fact that small groups of bewildered seal pups wander near the shore, in search of their mothers who have all fled to the safety of the sea. When left undisturbed in normal conditions, seal pups congregate in nurseries of 30 to 40 individuals while their mothers go to feed on fish in the sea. The entire beach is normally covered with seals basking in the sun, some nursing their pups, others arguing over a place on the rocks, but the atmosphere is calm. Not so after a cull. Most of the seals are either in the sea or at the water’s edge and the beaches are eerily empty.

There can be no justification for this brutal annual slaughter of 85,000 seal pups killed for their pelts and 6,000 bulls killed for their genital organs, which is why Sea Shepherd made it their mission to document this dark secret. Sea Shepherd will not rest until their mission of exposing this brutal seal cull to the entire world is accomplished. Not only is the seal cull unsustainable from a conservation viewpoint, but it is equally unsustainable from a public relations perspective.

Now that Sea Shepherd has witnessed this wildlife massacre, it will be possible to inform the media and public (especially tourists visiting Namibia), and to pressure the authorities into placing an immediate moratorium on the culling of the beautiful Cape fur seal for the sake of future generations of seals and humans alike.