A Tradition of Extinction 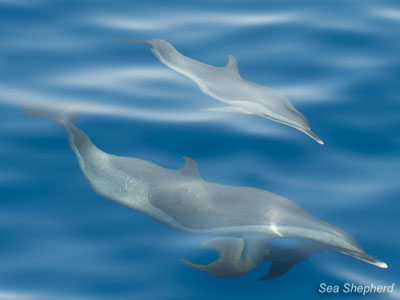 Spotted dolphins in freedom
Photo: Erwin Vermeulen / Sea ShepherdThe short-tailed albatross breeds on islands off the coast of Japan. They have been hunted on an industrial scale for their feathers since the second half of the 19th century. An estimated 10 million birds might have been killed. By the 1930s there was only a small population left on the island of Torishima. The hunting, however, continued, and when the Japanese government finally declared a ban on hunting in 1933, the animals were gone. Scientists and researchers declared the short-tailed albatross extinct, but an estimated 50 individuals, juveniles spending years on the wing before reaching sexual maturity, survived at sea. After the return of the birds, the first egg was laid in 1954. Still under threat from, for instance, long-liners, they are slowly recovering from the massacre.

No such luck for the Japanese sea lions, who once inhabited the Sea of Japan. They were killed for food, oil was extracted to fuel lamps, internal organs were used for oriental medicine, the skin was turned into leather, and the whiskers used as pipe cleaners. By the 20th century capture for circuses was added to this list. By that time the number of sea lions killed was already falling drastically. Japanese mass murder of Japanese sea lions ended in the 1940s when the species became extinct.

There is also no hope for the Japanese river otter. After not being seen for more than 30 years, it was declared extinct by the country’s Ministry of the Environment, last September. Once numbering in the millions, Japanese river otters were hunted for their fur. After massive slaughter they suffered the final blow when their habitats became destroyed and polluted.

Japan is in no way unique in their terrible track record of protecting animals and their habitats. Japan is, however, one of the few countries that stubbornly persist in butchering animals both at home and on other parts of the planet with complete disregard for the fate of the species or biodiversity. 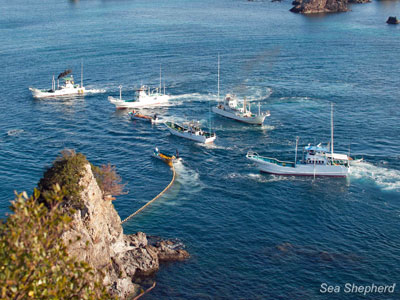 A good example is Japan’s Mitsubishi empire. With a 40% share of the world market for Bluefin tuna, it started importing thousands of tons of these prized fish this millennium, while their numbers were plummeting because of overfishing. The deep frozen Bluefin tuna will catch astronomical prices when this amazing fish goes commercially extinct as predicted. A perverse investment in extinction.

Another example is whaling. When the Soviets finally shut down their floating abattoirs in the late 1980s and many of the large whales were on the brink of extinction, Japan’s factory ship kept roaming the oceans, as the last of its kind, robbing the planet of these magnificent creatures. And it still is, it still sails out twice a year.

Japan says that the dolphins they butcher in Taiji or the whales they kill in the Southern Ocean are not endangered. Besides the fact that there are no reliable numbers for any of these beings, that claim was also once the truth of all whale species. There was a time that Japanese sea lions were not endangered. There was a time that the Japanese river otter was abundant. Alas, no more.

Japan demands respect for their culture and traditions, always the last line of defense when reason and common sense fail. There can be no respect for a tradition of extinction, nor can the rest of the world close their eyes to the criminal acts of cruelty committed. Where the morally bankrupt government of Japan fails, people who do care have to step in. Sea Shepherd is the only organization actively intervening to enforce conservation law and to show these atrocities to the world.