A Sunday at Sea with Sea Shepherd and the Shark Killers

A Sunday at Sea with Sea Shepherd and the Shark Killers

It was with great despair that I looked down from the aft deck of the Farley Mowat this morning and saw three smiling Colombian fishermen waving at us. On the deck of their small panga boat lay the bleeding, twitching, dying bodies of a four foot long Hammerhead and a six foot long Mako.

What struck me was the look of complete innocence on the faces of the three young fishermen. Their eyes did not betray any sense of guilt at their crime. On the contrary, one of them reached down and picked up the Hammerhead's still quivering body and held it above his head to proudly display his trophy. He seemed genuinely confused that we did not smile and wave back to him in return.

These three fishermen had four longlines in the water; each line was eight miles long. They said that their mother vessel had deployed three other boats to set lines, making a total of ninety-six miles of line set in the waters around us. I knew that even as we spoke, dozens of sharks were struggling to survive beneath the surface and we could do little to save them. These were Colombian fishermen in Colombian waters, and their activities were legal under the laws of Colombia.

It was hard to be angry with the smiling bastards. They had absolutely no comprehension of the damage they were doing, that sharks around the world are being wiped out so other smiling ignorant bastards on the other side of the planet can boast that they just paid a hundred bucks for a bowl of gelatinous chicken-flavored shark fin soup.

Off the coast of Costa Rica, sharks are dying as corrupt politicians in San Jose line their pockets with bribes. In Ecuador, sharks are being betrayed as the poachers bribe and bully their way to secure illicit profits. And now here in Colombia we can see the bodies, freshly torn from the sea, bleeding pathetically on the floorboards of a small boat as the boots of the fishermen splash blood onto the cuffs of their pants.

A few hours later, our luck changed. We spotted another longliner, this time I could see the name of her home port of Manta on her stern, and she was flying an Ecuadorian flag. I sent a boat to question the crew and ask them what they were doing in Colombian waters. They said they were allowed to fish here. We asked for a permit, and they admitted they did not have one. When we told them we would be informing the Colombian Coast Guard, they became very nervous and took off in the direction of Ecuador, leaving their longlines in the water.

We destroyed two of them, each about eight miles in length, by attaching heavy ten foot long anchor chains to the line and then watching the plastic bottle floats pop below the surface and disappear one by one all the way to the horizon.

A few hours later, we encountered a second Ecuadorian longliner, the Jostin. This one was not fishing, but hailed us instead with a request for assistance with a medical emergency. I sent our medical officer onboard to discover that one of the large Marlin they had illegally taken a few hours earlier had not surrendered meekly to these poachers. A fisherman lay groaning in pain with a nasty, raw, gaping wound where the sword-like beak of the Marlin had run through his upper leg.

The brave Marlin had been killed but had inflicted some well-deserved retribution before falling at the hands of these outlaw butchers. Still we had no choice but to dress the wound and administer some painkillers to the man. The wound was infected, and we told the Captain that he would have to return to Ecuador to get the man to the hospital.

Some of our critics say that these people are just poor fishermen and we have no right to interfere with their livelihood. After all, they are just trying to feed their families, just trying to make a living. With this reason they justify an illegal activity that is purging our oceans of life. These same critics have no sympathy for the poor families of cocaine growers, favoring one criminal activity over another on the basis that poachers are killing sharks, and who cares about sharks anyway? They fail to realize that by killing off the sharks, they are causing irreparable damage to oceanic ecosystems, and in the long run that will kill more humans than the drug trade has or ever will.

All the way from the Galapagos Islands Marine Reserve of Ecuador to the Malpelo Island Marine Reserve of Colombia, we have seen widespread illegal longlining for sharks and large fish. It is estimated that over 300,000 sharks are being butchered annually in the Galapagos alone. Every day, sharks are dying by the thousands in these waters, slain at the hands of these Ecuadorian, Colombian, and Costa Rican fishermen who scour these waters in small boats deploying tens of thousands of miles of hooked lines spread out in lethal plastic tentacles with steel hooked claws that daily strangle the life out of the sea.

We are fighting them with meager funds using dedicated and courageous volunteers because the world is slow to realize and to understand the consequences of allowing this wholesale slaughter of some of the most remarkable and essential species in the sea-the sharks. For more than four hundred million years, the sharks have been here, shaping life in the sea, and we are now watching them disappear before our eyes. 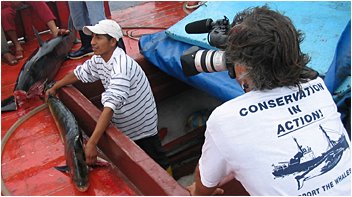 It is a tragedy with global consequences that will affect the very evolution of life in the seas, but the greatest tragedy of all is that so few people care, and even fewer are doing anything to stop this savage massacre of the sharks.

As we watched the fisherman groan in pain from his festering wound, I found myself having little sympathy for his torment, although we tended to his wounds and relieved his pain. My sympathy lay with the brave Marlin who ran him through while struggling with his last gasp to survive in a world where his kind are daily and ruthlessly savaged by the brutality of uncaring humans; humans with their unquenchable appetite for unleashing remorseless unrelenting destruction against life in the sea.

Out here on the water with the poachers, we are the ghostly black ship that has appeared over the last twenty years to destroy longlines and to harass their profits. They call us pirates, and we humor their accusations by flying our own Jolly Roger and daring to challenge their arrogance in taking life from the sea.

The Galapagos Corridor is now bouncing with rumors and gossip about us. They hate us in Manta, Ecuador where a price has been put on our heads. In the last week, we exposed the names and connections of the shark fin mafia on the front pages of the Ecuadorian newspapers. We have politicians howling for our blood from Guayaquil to Quito, but we have been able to rip the lid off the odorous box of scoundrels and butchers who operate the poaching smuggling networks that bring the fins of sharks from the marine reserves to the restaurants of Hong Kong and Shanghai.

We can no longer go to Costa Rica. The courts of that nation are controlled by the Taiwanese fishing industry, and they have threatened me with arrest and incarceration for a year without charges if I return to their waters. Yet the rangers on Cocos Island have guns, generators, and equipment only because we provided them with the tools to do the job that their own government refused to give them.

As we pass Malpelo Island tonight, I will radio our regards to the Colombian soldiers who man the remote little outpost protecting the waters around the island from poachers. They, like the rangers of Cocos Island and the rangers of the Galapagos, are trying to do their job despite every obstacle thrown into their paths by their own governments to prevent them from their duty of protecting marine wildlife from criminals.

Sea Shepherd salutes and supports these rangers, as we salute and support the National Police of Ecuador and all those brave and concerned citizens of these nations who have the vision to see that unless we act aggressively to stop the looting of our living treasures, we will leave a barren and forbidding future to the very children these fishermen and their supporters profess to care for.