A Cruel Sacrifice Beneath the Dark Slopes of Erebus

A growler can split a steel hull open like it were glass, rapidly sending tons of frigid water into the boat as the sea sucks the vessel down into the briny darkness of the depths, before the sailors even have a chance to comprehend their untimely fate. As the icy grasp of the sea swallows the small boat, the EPIRB and a lifeboat are released with a pressure switch and rise to the surface. It was that distress signal that alerted the world to the fact that the Norwegian 14-meter yacht Berserk with her three crewmembers had disappeared from the world of the living.

The sea can be a severely unforgiving place, and the Southern Ocean and the Ross Sea in particular can be extremely cruel to mariners.

When I first received word that a marine distress signal had been received from the Norwegian flagged Berserk in McMurdo Sound, I took one look out the wheelhouse window of my ship the Steve Irwin, and thought that if the seas and the weather were anything like what we were experiencing at the time, I could not imagine how awful of a situation the sailors on that tiny boat were in. 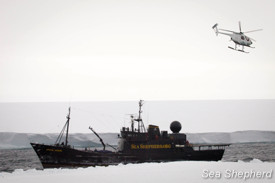 The Steve Irwin and Nancy Burnet helicopter amidst the Ross Ice Shelf. Photo: Barbara VeigaAs it turned out, the situation 200 miles to the west of us where the Berserk was at the time the distress signal was issued, was worse, far worse. The winds were screaming down off the glaciers and the Antarctic Plateau, whipping around Mount Terror and howling down the ice laced black lava slopes of Mount Erebus, funneling into the sound at 155 kilometers an hour. With the wind chill, the temperature had dropped to negative 50 degrees Celsius. There was no doubt those boys were in trouble and they knew it. But all they could have done was ride it out. There was no safe port, no refuge, and no quiet and calm corner of the sound to give them hope. Just Mount Erebus to the east, rising like its dark brooding namesake, to herald a voyage to the underworld beneath the sign that proclaims, “Abandon hope ye shall who enter here.”

As mariners, we did the only thing we could. We responded. The New Zealand Navy vessel Wellington was closer, but had suffered ice damage and was limping back north to New Zealand having had three of their lifeboats ripped from their decks into the howling sea.

British Antarctic explorer Apsley Cherry-Gerrard in his book The Worst Journey in the World, described this area exactly when he spoke of his experiences from Captain Robert Falcon Scott’s base camp on Ross Island in 1911. One hundred years later, not much has changed. The stark white barren hills are as hauntingly beautiful as they are deadly, proclaiming quite boldly that this is a dangerous place of extremes where humans venture at their own great personal risk.

Two days before, I stood on Roosevelt Island, some 20 miles in from the sea from the Bay of Whales on the other end of the indescribably awesome Ross Ice Shelf. It was like the alien surface of Pluto with an eerie whiteness impossible to describe. The winds roared across the stark plateau with a vengeance, whipping my hat off my head and sending it across the polished flatness of the surface faster than I could retrieve it. I wrapped a Norwegian flag around my head to keep my ears from being frostbitten.

I had the Norwegian flag in my hand because we were there to commemorate the landing of Roald Amundsen exactly one hundred years before, as he set up the base camp for his successful race to be the first to the South Pole. We were there because I felt it was an excellent place to announce that now that we had driven the Japanese whalers from the Southern Ocean, it was time to oppose the outlaw whalers of Norway in the North Atlantic. And thus the crew posed with a banner and the Norwegian flag to respectfully honor Amundsen’s achievement, and to appeal to Norway to recognize this achievement by ending the killing of whales.

Truthfully, we were not that optimistic or naïve to expect that our request would be honored, so I felt what better place than the Bay of Whales at Amundsen’s base camp to announce that the Sea Shepherd Conservation Society would be returning to Norway to once again oppose Norwegian whaling. Norwegian whaling is more blatantly illegal than Japanese whaling. The Norwegians have not chosen to insult the world’s intelligence by pretending that they are killing whales for science. In Norway, is it very much about the money and thus it is a violation of the global moratorium on commercial whaling.

We were set to release the photos and the story of the announcement at the Bay of Whales when I received the call from the New Zealand Search and Rescue centre that a distress signal had been received from the Norwegian vessel Berserk. As mariners, the call to assist in the search for the Berserk became our priority.

We turned our bow westward and into the most fearsome onslaught of wind, ice, sea spray, and heaving swells. Erebus, looming over Ross Island, was not going to make it easy to approach the gates of hell as McMurdo Sound had become.

For 16 hours we took on the rage of the sea, until suddenly, the ocean gave up the fight and a calm stillness spread across the horizon as the swells flattened out, the sun beamed down with relative warmth, and visibility became perfect. We launched the helicopter and began a meticulous search pattern of the entire sound, finding nothing until the morning of February 25th when we came across the eight-man Avon life raft from the Berserk drifting 45 miles north of where the distress signal first occurred.

And that was that – except for the life raft and later some ration and first aid packets from the life raft, not a trace of the yacht or her crew, no oil on the surface, no clothing or other debris in the sea.

The tragedy reminded us of just how fragile our lives are and how quickly nature can snatch our most precious possession from us.

It also reminded me that although we landed at the Bay of Whales to send a message to Norway to end whaling, the fact remained that the Norwegian men on the Berserk were still our fellow human beings. We began our search with hope that we could find them, and ended the search in sadness that we had not.

Admunsen escaped the tragedy that took the lives of some of the brave men of the 1911 British Antarctic Expedition. One hundred years later, Antarctica continues to extract its lethal tribute of sacrifice from the human spirit that continues to challenge it.

All of us on the Steve Irwin, volunteers from nations around the world share the loss of these men with their families and loved ones. We did not know them, but in searching for them we experienced concern, compassion, hope, and remorse. We also deeply felt a connectedness that wherefore they had gone, any of us could follow, and that nature in all her magnificent beauty and demonic fury does not hold favorites. And thus we felt their loss as we glimpsed the fragility that all of us as humans are burdened with.

To their families, we can only say, we tried. We scoured the entire search area three times by air and sea, and we searched for them as if they were our own brothers, for in truth they were!  Brothers united by different goals, but sharing the rare awesome passion for adventure and knowledge that for a century has brought men and women like us to these remote, frozen, and forlorn shores. 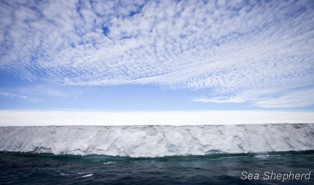