By the time President Chinchilla Miranda returned in her police escorted motorcade, there were about 400 Sea Shepherd supporters and about a dozen Berlin police officers who were also very supportive. There was no doubt that Sea Shepherd Berlin was well represented and it was made evident to the President that our support base is strong.

All through the day diverse reports kept coming in of Sea Shepherd demonstrations in front of German embassies and consulates in Hong Kong, Australia, Canada, the United States, South Africa, France, Spain, Brazil, Costa Rica, and many other countries. In Paris the protest took place at the Eiffel Tower. 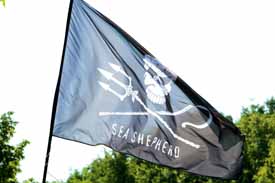 The Jolly Roger flies proudly above the Victory Statue Plaza in Berlin. Photo: Jan HolsteThe demonstrations were organized to call for my freedom and to send a message to Germany to drop an extradition charge that Interpol has already dismissed as politically motivated, but it was also about something more. My arrest on a charge stemming from disrupting illegal shark fin poaching operations in Central America a decade ago, has given Sea Shepherd Conservation Society a wonderful opportunity to shift the focus to the international travesty and criminality of shark finning- the brutal and remorseless massacre of tens of millions of sharks worldwide to supply the shark fin soup demands of some Asian countries.

It was an opportunity to focus attention on Dr. Giam Choo Hoo of Singapore, the notorious member of the UN committee CITES, who works for the shark finning industry and has helped to block protection for endangered species of sharks. It was an opportunity to focus on the incredible slaughter of sharks in Central and Latin America and the insatiable demand for shark fins in Asia.

It was an opportunity to focus on our up-coming summer campaign to the South Pacific to investigate shark finning. It was also an opportunity to offer Costa Rica an offer of cooperation and support to defend and protect the beautifully unique marine eco-system around Costa Rica’s treasured Cocos Island.

Although I was a Berliner for a day, I had to leave the incredible crowd of passionate German Sea Shepherd activists to return to Frankfurt where I was able to report to the police before five o’clock. Under the terms of my release I must report to the Frankfurt police station twice daily, once before eleven in the morning and again before five in the afternoon.  Of course I am not allowed to leave Germany. Although not a prisoner in the actual prison anymore, I remain a prisoner under house arrest, forbidden to leave Germany until the extradition demand is dropped or until I am forced to go to Costa Rica. 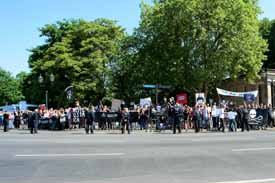 Sea Shepherd demonstrators in Berlin.
Photo: Jan HolsteIn Frankfurt for the evening and unable to attend our 35th anniversary fund raising event in Cannes, I was still able to participate by Skype with all those attending, not quite the same thing but better than nothing. It has always been my policy to expect the unexpected and then work to make the unexpected work for the cause. That is what we are doing and we are turning the inconvenience of my restrictions to Germany into a campaign not just to free myself from this extradition demand, but more importantly to make this a campaign about saving our sharks and defending our oceans.

In 1997 when I faced a similar situation in the Netherlands where I was held for 120 days on a Norwegian extradition request, we were able to turn the internment into a highly publicized campaign against Norwegian whaling. We now have an excellent opportunity to take advantage of this turn of events to address the plight of the sharks of the world’s oceans. This showing by thousands of people worldwide calling for action to win my freedom is much appreciated and incredibly encouraging. Yet even more encouraging is the opportunity to explore real possibilities for hands-on shark conservation work in Costa Rica and the opportunity to reach millions of people with the important message that sharks are endangered and we need to do all that we can to defend and protect them. Thanks to the encouraging support of thousands of people worldwide I can see the bright side of my position here as a prisoner in Germany. Sea Shepherd Conservation Society is becoming a stronger voice every day in defense of the diversity of living species in our oceans. Today gave me the opportunity to see that collective voice in action and what I saw was a passionate, dedicated, and loving concern for our oceans and the wonderful sentient beings that dwell within the briny depths of our life sustaining oceans.