And the Bloodlust Continues in the Faroe Islands... 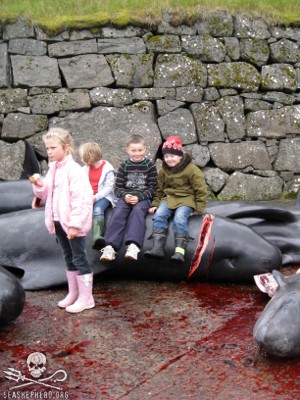 A morbid scene: Children sit upon a newly killed Pilot Whale after a Grind in The Faroes.
Photo: Sofia Jonsson / Sea ShepherdOn August 27, around 2pm local time, another 51 Pilot whales were butchered in the Ferocious Isles. This time in the village Hvalvik, in the East of the Faroe island, Streymoy, not far from the capital, Tórshavn. The name means Whale Bay and 188 Pilot whales were killed here in May 2009. Thankfully, on the evening of the 26th, a Grind was reportedly aborted in Suðuroy when darkness fell, otherwise the kill numbers would be even higher.

When we reported on the bloody grind season earlier this month (Brutal Death and Suffering; Business as Usual in The Faroe Islands) we asked you to write to the Danish authorities.

On 8/22/13, "Maria Padilla Arndt" mararn@um.dk, Assistant Cultural and Press Officer of the Danish Consulate General in New York, replied to a concerned world citizen in the following email to defend the Grind. The e-mail is a combination of standard apologist platitudes and full-blown lies. Sea Shepherd’s replies are added to the text:

The Danish Ministry of Foreign Affairs has received your e-mail where you express your feelings caused by an e-mail you have received containing pictures of alleged dolphin killings in Denmark. The pictures may have been accompanied by inflammatory and misleading comments, for example that they depict a rite of passage for young men. We take note of the fact that you have found the above-mentioned pictures, and the accompanying text, disturbing. The pictures are from catches, not of dolphins, but of pilot whales in The Faroe Islands.

Sea Shepherd: Pilot whales are currently classified in the family Delphindae and are therefore dolphins. In the end they are all cetaceans, mammals, intelligent sentient beings. August 13, 430 Atlantic White-sided dolphins were slaughtered; Bottlenose dolphins are also killed in The Faroes. See your own link: Whales and Whaling in the Faroe Islands

The pictures are very selective, and partly outdated.

Sea Shepherd: No outdated photos have to be used as 1,085 dolphins have been slaughtered since July 21 this year and footage of the bloodbaths is being widely circulated within the Faroese press and by Faroese citizens through social media.

As you seem to be interested in the subject, you are advised to find more information about the Faroese pilot whale drive fishery on the homepage http://www.whaling.fo. In Wikipedia, the free encyclopedia on the Internet, you may also find an article called “Whaling in the Faroe Islands”.

The facts, which you will find, include the following:

Sea Shepherd: Killing for food is not an excuse for cruelty in the same way as the need for labor is not an excuse for slavery. Further, Pilot whales are unfit for food as stated in your own link: Dietary recommendation on the consumption of pilot whale meat and blubber and in this one: Faroe islanders told to stop eating 'toxic' whales

Sea Shepherd: The regulations don’t work, as there are no repercussions for gross neglect. A few examples of neglect are listed in this article: Brutal Death and Suffering; Business as Usual in The Faroe Islands.  If investigations into cruelty are part of the regulations, can you then point us to the publications of the results of these investigations?

Sea Shepherd: The IUCN lists the long-finned Pilot Whale as ‘data deficient’. You cannot claim sustainability if population figures are unknown. The IUCN has the following to say about this species: “Threats that could cause widespread declines include high levels of anthropogenic sound, especially military sonar and seismic surveys, and by catch. Primary threats that could cause widespread declines include entanglement in fisheries and competition with squid fisheries. The combination of possible declines driven by these factors is believed sufficient that a 30% global reduction over three generations (72 years; Taylor et al. 2007) cannot be ruled out (criterion A).”

Only NAMMCO calls the catch sustainable. Their opinions are not credible as this organization was founded by whaling nations to protect their industry from conservation efforts.

Even if the catch would prove to be sustainable, this does not justify the cruelty.

Sea Shepherd: Torture does not ask for improving of its methods and instruments, but for cessation. There are no humane ways to kill a highly intelligent, socially complex whale or dolphin and the drive in itself is abusive. If anywhere in Europe you would handle a cow, pig or chicken the way these dolphins are butchered, you would end up in jail.

The Faroe Islands are an archipelago in the North East Atlantic. The economy of the islands is heavily dependent upon the sea and its living resources.

Sea Shepherd: The Faroe Islands don’t need to kill dolphins for food as the era of isolation and dependence on maritime resources are far behind us. There is a high standard of living in the islands and supermarkets are everywhere.

The islands are an autonomous territory within the Kingdom of Denmark. Affairs regarding industry, agriculture, the environment, fishing and whaling, are subject to Faroese autonomy.

Sea Shepherd: The Danish foreign ministry should not hide behind autonomy of the Faroese in commercial or industrial matters. It was the Danish navy that showed up when Sea Shepherd ships visited the islands in 2010 and 2011. Danish subsidies are an important source of income for the Faroese. The islanders would go independent if they were able to hold up their own pants. Denmark financially assists the abusers and can therefor share in the responsibility and shame as well.

This is a moral issue that affects and blemishes the Kingdom of Denmark.

If you, after having acquainted yourself with the facts of the matter, should wish to address the Faroese authorities regarding pilot whaling, the relevant e-mail address of the Government of the Faroes is mfa@mfa.fo

Sea Shepherd: Please send them a polite email to let them know how you feel about the slaughter. 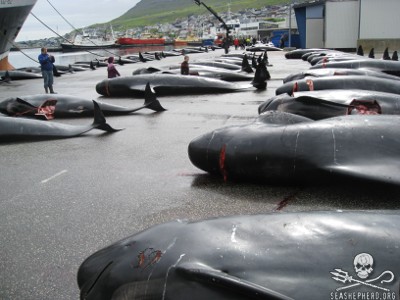 Dead Pilot Whales are lined up one after another and numbered after a Grind in The Faroe Islands.
Photo: Sea Shepherd