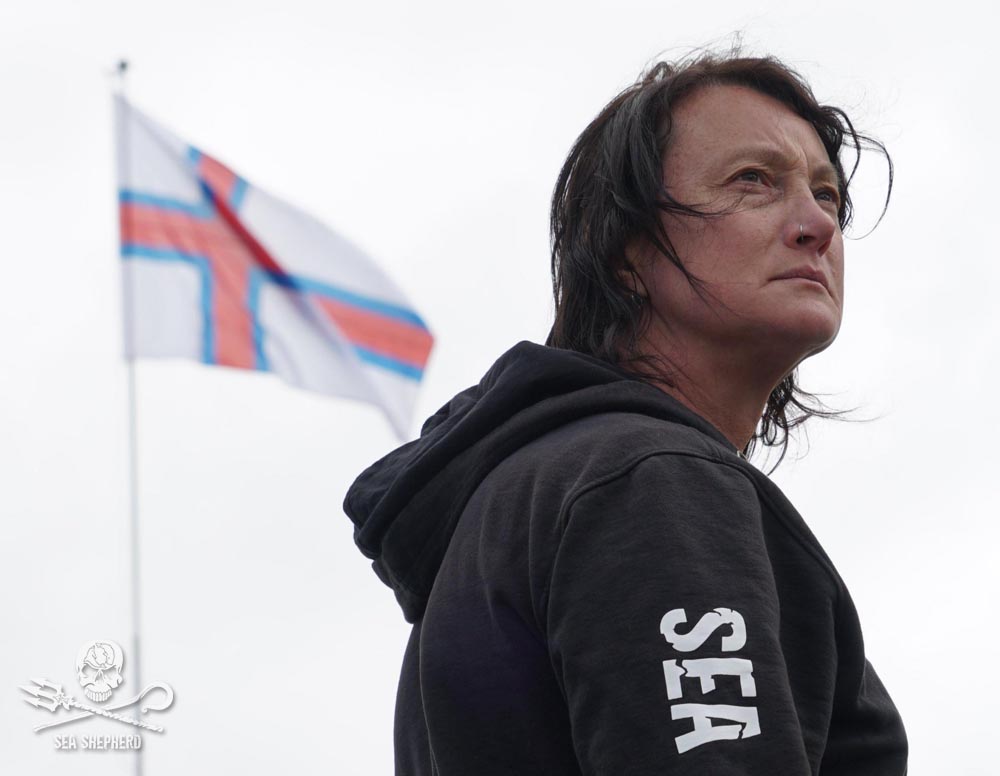 Captain Jessie Treverton in Tórshavn, capital of the Faroe Islands in August 2016 to demand a court trial date. Photo: Sea Shepherd UKThe grindadráp of the 21st May 2017 was also the first hunt since the extraordinary court trial on the 24th November 2016 of Sea Shepherd captain Jessie Treverton (UK). The Faroese prosecutor in Tórshavn put Jessie Treverton on trial for breaching Faroese animal welfare laws by causing 'unnecessary suffering' to a pod of dolphins. This followed an action by Jessie Treverton and two other female crew members from France on the 17th September 2014 where Jessie successfully protected a pod of over 200 protected Atlantic white-sided dolphins from a potential grindadráp by driving them away from the islands using the Sea Shepherd boat MV Spitfire. Afterwards MV Spitfire was chased and boarded by Danish armed forces in a military RIB resulting in Spitfire being confiscated and the three women arrested by Faroese police.

After multiple postponements of her trial date by the Danish court in the Faroe Islands, on November 24th 2016 Captain Treverton's case was finally heard, wherein she was found guilty of causing unnecessary suffering to a pod of dolphins and ordered to pay a fine of 500 Danish Kroner or serve 8 days in jail as well as paying her legal expenses (to date the Danish court imposed fine remains unpaid and any jail sentence remains unserved).

After the ruling, Jessie Treverton stated: "I am very happy to accept the court's verdict that my driving a pod of dolphins to safety was against animal welfare laws, because if the law applies to me then it surely must also apply to the Faroese people. A legal precedent has been set and driving dolphins is against Faroese law”.

This ruling now requires more detailed analysis following the recent grindadráp. Jessie was charged under the Faroese law - lagtingslov nr. 9 af 14. marts 1985 med senere ændringer om værn af dyr § 19, jf. § 1 (which is in English - the Law of the Løgting number 9 of 14th March 1985 with later changes regarding the protection of animals §19 cf. §1).

Jessie Treverton and the two French crew were accused of using the boat MV Spitfire irresponsibly and at speed to drive a pod of dolphins out of Nolsoyarfjørd thereby inflicting unnecessary over exertion, distress and suffering upon the dolphins on the 17th September 2014 for just 12 to 15 minutes (between approximately 15:10 – 15:30hrs).

During the trial the Danish judge was presented with expert opinion from Denmark’s Veterinary Health Council (Ministry of Health and Food) provided by the Faroese Prosecutor.

The Danish Veterinary Council panel was asked for an opinion as to if:

The Veterinary Council’s opinion was that “Fast sailing with a powerful speed boat will create great levels of noise under water, which can induce the described behaviour in dolphins. The speed is most likely unpleasant for the animals, and if they have been in contact with boats before, they might be able to link the noise with a risk of being hit by it, or they can link the noise to the risk of being euthanized, if they have been hunted and/or attempted to be hunted by boats before”.

The Veterinary Council’s opinion on this was that “Animals must be treated properly and protected in the best way possible from pain, suffering, anxiety, permanent injury and significant inconvenience and must not with maltreatment, overwork or in any other way be subject to unnecessary suffering. Animals must also be treated with care under consideration to their behavioural, physiological and health demands”.

Based on the opinions of Denmark’s own Health and Veterinary Council in a Danish Court in the capital of the Faroe Islands - the court ruled that the actions of driving a pod of pilot whales for 12 minutes on the 17th September 2014 by a single Sea Shepherd boat subjected a dolphin pod to unnecessary over-exertion and suffering, and that Jessie Treverton was guilty of animal cruelty in connection to paragraph 1 [the previously mentioned legislation - lagtingslov nr. 9 af 14. marts 1985 med senere ændringer om værn af dyr § 19, jf. § 1].

This was a historic ruling by a Danish judge. Using existing Faroese animal welfare legislation from the 1980’s which has never been applied in this way to any Faroese grindadráp participant - a single foreigner (Jessie Treverton) in a single 8.5 metre boat (Sea Shepherd’s MV Spitfire) was found guilty of causing unnecessary suffering to dolphins while successfully driving them at speed away from a killing bay during just 15 minutes (thereby saving their lives before a grindadráp hunt could be called. There was no evidence of any physical harm being caused to the dolphins by Jessie Treverton’s actions that day in 2014.

By comparison this week on the 21st May 2017, after this much delayed court ruling, a pod of pilot whales was driven using at first 5 then over 20 Faroese boats (including RIBs and Speedboats) for over 3 hours causing the whales to be so stressed and disorientated that they could be deliberately stranded using a ‘wall of sound’ from all the boat engines onto a beach where they were killed over a period of at least ten minutes while swimming in the blood of their other dead and dying relatives in a manner which would never be tolerated in even the worst EU slaughterhouse.

In August 2016 in expectation of a guilty ruling in the November trial Jessie Treverton hand delivered high quality video evidence filmed covertly by a third party to the Faroese police and requested they open an investigation into multiple breaches of Faroese animal welfare legislation by participants in a grindadráp at Hvannasund in July 2016. To this date, no response has been received from the Faroese Prosecutor or Faroese Police to the video evidence submitted and Sea Shepherd is not aware of any attempt to investigate the crimes or of pending prosecutions of any Faroese person.

When you consider all the above the following conclusion must be made: That the Faroese Prosecutor, Danish Judiciary and Police have decided to ignore Faroese animal welfare legislation for over 30 years in regards the grindadráp - only to specifically apply that same legislation to convict a Sea Shepherd captain of causing unnecessary suffering and distress to dolphins in carrying out a brief drive of a dolphin pod to save their lives. Also, that both Faroese and Danish taxpayers money is being used to both assist in the grindadráp (in the case of Faroese patrol vessels and small boats being used actively in the hunts) and also in defending the killing of pilot whales and dolphins from interference by Sea Shepherd volunteers (when using Danish police, naval personnel, ships and helicopters). Furthermore, the Danish judiciary, police and Faroese prosecutors recognise and accept that the grindadráp by nature causes necessary suffering to whales and dolphins in order to continue the barbaric outdated grindadráp hunts.