Amazing Operation in the Red Sea 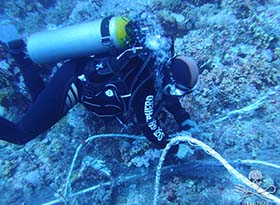 On the morning of May 7, I was notified of the existence of an illegal longline net in the waters of the Ras Mohammed Marine Protected Area, which is a national park in Ras Goma (Tiran).

I shared this information with officials working at the park, who also generously agreed to send one of their boats to assist us in retrieving it from the ocean.

Longlines are forbidden in many places around the world because they kill indiscriminately and, as such, are a huge threat to the ocean’s precious marine life. Not only do the lines catch high amounts of bycatch, which is generally discarded dead into the sea, but they also attract sharks - which is extremely dangerous in a diving area.

After we got the OK from the Sinai Divers dive base in Sharm El Sheik, our two diving instructors - Darja and György - and I planned to take the dive boat to the location, then dive on the nets, cut them loose, and remove them from the ocean. However, as there were guests on board the diving boat at the time, György stayed on board to host while Darja and I went for the dive to free the ocean from the nets.

The net was approximately 100 to 150 meters of length. Fixed on a buoy, it was about 40 meters into the deep with well over 100 fish caught in it.

At about eight meters depth we came across an entangled doctor fish (Acanthuridae). We would later realize that this was the only survivor of all of the animals that were caught in the illegal net. I was able to free the fish from the net while Darja dove deeper.

After the doctor fish was rescued, I dove down to meet Darja. These nets are very dangerous as they swing with the current and you can easily get trapped. They are made of nylon and extremely tough, so a good knife is required to cut the nets loose, and also to protect against diver entanglement.

Darja had done a good job, already at 30 meters depth.

After some more cutting we were finally able to loosen the ropes which held the net, trapped in the coral reefs. From there, we were able to lift the longline onboard our boat. The remainder of the dead fish caught in the net were also lifted on to the boat.

While we were sad for the loss of life that we saw, we were also very proud of our efforts, which meant that no further life would be lost in this net. It was very successful day for all of us, and for the oceans.

This was definitely a team effort, and thanks goes to Sinai Divers Sharm El Sheik, Captain Mohamed Nofal, his crew Ahmed Nofal and Mahmoud Hamsa, as well as dive instructors György Pall and Darja Miriuca, who didn’t hesitate for a moment to go on this dangerous dive with me.

Thanks also goes to officials at the Ras Mohammed Marine Protected Area national park and to all the guests on our boat who, without hesitation, gave up their third dive in order to give us the time to get this job done.

Finally, thank you to Yves Stocklausen for the original English translation of this story.