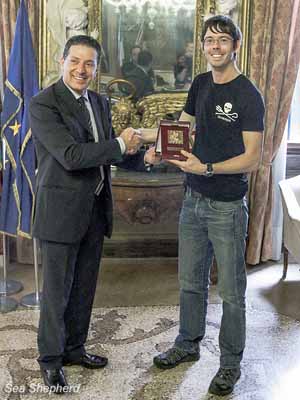 Capt. Hammarstedt is welcomed with the traditional Lion of Venice at Venice City Hall
Photo: Marianna BaldoIt was two fulfilling days of heartfelt emotion recently for the Italian Chapter of Sea Shepherd Conservation Society. On the morning of September 1st, Venice woke up to the incredible and surprising sight of Captain Hammarstedt arriving via gondola at perhaps Venice’s most famous landmark, Piazza San Marco (St. Mark’s Square), sailed by the oarsman Thommaso Luppi. Captain Peter Hammarstedt arrived in Venice to a very warm official welcome from the city and its representatives. A large delegation of Venetian gondoliers and a group of Sea Shepherd supporters and volunteers were on hand to joyously welcome Captain Hammarstedt. Later, the Captain visited assessors and other officials in the ancient corridors of Venice’s City Hall and received a traditional welcome when he was bestowed with a replica of the Lion of Venice, the city’s legendary mascot.

At the Venetian Sailing Club, preparations were underway for the christening ceremony of the Sea Shepherd Italia, a sailboat donated to the Italian chapter. The new vessel is a welcome addition to the fleet and will be an ambassador of ocean defense specifically along the Mediterranean coastline. Today, the endangered Bluefin tuna, an extraordinary marine animal, is being indiscriminately and illegally fished to extinction in our oceans. During Operation Blue Rage in 2010, Sea Shepherd intervened to release 800 bluefin tuna — many of them juveniles — which had been illegally caught after the close of season, fish that are today swimming free in our oceans because of our action.

The Venetian Sailing Club gave Sea Shepherd a hearty and impeccable reception to celebrate the vessel’s launch while the City of Venice officially embraced Sea Shepherd’s Jolly Roger emblem evidence of its friendship with “Neptune’s Navy.”

Observations From a Long liner

Observations From a Long liner

The last place in the world I thought I’d be is standing in a huge blast-freezing morgue with one eye on the door to ensure I didn’t meet a similar untimely demise, counting the number of blue shark carcasses deep in the hull of a long liner in the middle South Pacific, hundreds of miles from shore. But here I was…

Up until now, we’d only boarded purse seiners – so I’ve been looking forward to hearing those words. To me, long liners meant sharks – and probably lots of them. Another new opportunity to learn as much as possible about those doing a considerable amount of the fishing that is decimating shark populations around the world. And the potential to arrest fishermen for their illegal shark catch.

Iaekana, the marine officer, and I kitted up quickly and prepared to board the Korean vessel – with a legal license to fish in PIPA. Putting on our dry suits, Iaekana told me about a recent shoot out aboard a long-lining vessel, which resulted in a fisherman’s death. Clearly a warning — purse seiners were one thing, long liners another. We approached and boarded with caution.

While Iaekana went through the boat’s paperwork, I inspected the large ship, filming and observing the beacons, the long lines and buoys, and the bags full of hooks. It wasn’t long before I found the shark fins — drying on the stern of the boat; hanging on a line amongst the crew’s newly washed clothes. Blue shark fins — and plenty of them — a variety of sizes from immature to sharks undoubtedly bigger than me. Dorsal, pectoral, and caudal (tail) fins, all hanging in the sun to dry.

An Odyssey for the Whales

An Odyssey for the Whales

“Once more unto the breach dear friends, once more.”
— William Shakespeare, “Henry V” 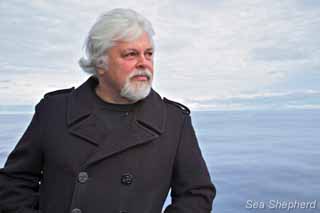 Photo: Barbara VeigaIt is September 10th and I have been free from Germany now for 50 days.

I can’t say that it has been unpleasant. As a matter of fact I don’t think that I have had the opportunity to enjoy nature so much in years. The number of species that I have seen up close in person over the last month and a half has been awesome and to me that is the true value of being alive – to see, hear, smell, taste and touch the natural world, to be amongst the dolphins and whales, seals and turtles, birds and fish, to experience life above, upon, and below that great and mysterious cradle of life we know as the sea.

And to see the stars at night, the broad infinite sparkling belt of light twinkling mysteriously from the past, to see meteors burning into fiery dust in the sky, the green flash of the sun as it dips into the sea, a cloud burst showering the decks with the crystal clear lifeblood of the Earth.

Read more: An Odyssey for the Whales

A 2012 Update on the Global 3-Tier Campaign to Ban Aquarium Trade Trafficking of Marine Wildlife: Part Two of Two

The average home aquarium hobbyist used to be a 30-50-something male. Now he's female, morphed as it were, like a redlip parrotfish. 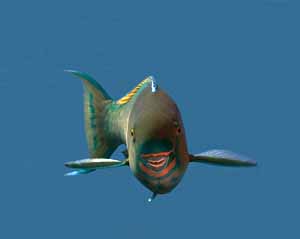 A redlip parrotfish hams it up for the camera

The Price We Pay for Saving Wildlife

The Price We Pay for Saving Wildlife 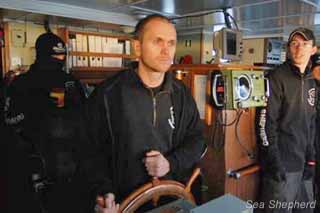 Captain Alex CornelissenThere are many of us in the environmental movement that have been arrested and even incarcerated for protecting life. Often our only crime is having the audacity to stand up against countries blatantly committing crimes against nature in favor of their economies.

Despite many laws and treaties in place to protect habitats, species and nature in general, enforcement of these pieces of legislation is often lacking or even non-existent.

Sea Shepherd Conservation Society is a law enforcement agency that upholds international law on the high seas; we do so legally within the context of internationally accepted regulations. We are doing the work that governments around the world should be doing but seem unwilling or unable to do. It is apparently not a priority to protect areas outside their economic jurisdiction, as there is no short-term political or financial profit to be made by this course of action. This is where Sea Shepherd comes in.

Read more: The Price We Pay for Saving Wildlife

A 2012 Update on the Global 3-Tier Campaign to Ban Aquarium Trade Trafficking of Marine Wildlife: Part One of Two 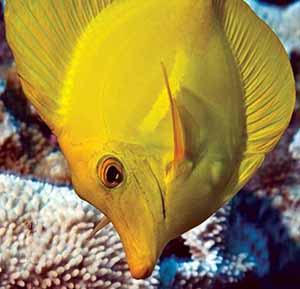 Tier 1: The Supply Side. Hawaii remains an aquarium trade hub, as both a wildlife extraction center and transshipment point from other Pacific reefs in a continuing free-for-all of atrocity, devastating waste, and reef decline. 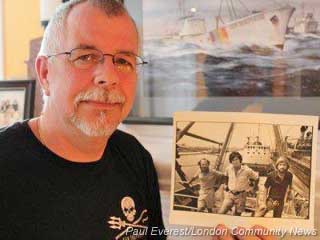 Stephen Watson. Photo: Paul Everest/London
Community NewsMy brother Stephen Michael Watson died on August 29th in the same hospital in St. Stephen, New Brunswick in which he was born in 1958, the same hospital where our mother Annamarie died in 1964. He was the fifth of seven children and the first of us to pass away.

He was also the most beloved. The gentlest of all the children and also the most talented. His art was original, unique, vibrant, intuitively connected to the reality of our planet and the contradictions of humanity relative to the promise and the beauty of this ocean world we are blessed to be a part of.

The grandson of a great Danish Canadian artist Otto Larsen Sumner, he alone of all of us inherited the extraordinary ability to splash his visions upon canvas and as an artist he was never interested in commercializing his creations. He made them available to average people and he donated them to charitable organizations including quite few for Sea Shepherd fundraising events. 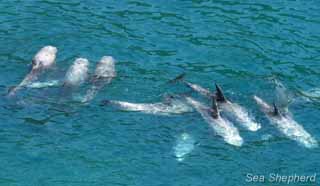 Risso's Dolphins before the slaughter...The annual Taiji dolpin slaughter is scheduled to begin September 1st. When I think back on the time I spent in Taiji, I don't dwell on the injustice of my incarceration, but rather on the injustice done to the Risso's dolphins.

In my 20+ years at sea I've never seen one up-close. In Taiji I saw them every week and during some terrible weeks, every single day. Terrible, because these were not animals at play in the wild, searching for food or interacting with each other in their complex social structures, but animals scared to death, running for their lives. Running in vain, because no matter how intelligent these dolphins are, they are no match for 12 highly maneuverable diesel-powered boats, driving them with a wall of sound comprised of engine noise and men beating with hammers on steel poles, into a maze of natural, rocky, inlets along the coast until there is nowhere left to go. The nets close behind them. This is the killing cove.

Read more: Contemplating the Risso's Dolphin on the Eve of the Annual Slaughter 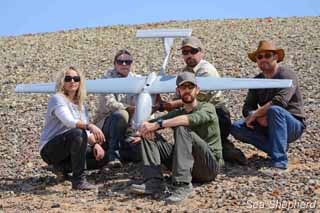 O.R.C.A. Force with UAVThe touring van stops in the parking lot at Cape Cross.  A handful of foreigners step out and are immediately greeted by a freezing breeze and the horrendous smell of death and decay. “You’ll get used to it,” the guide promises with a grin while the visitors step on the wooden walkway that surrounds the area.

Eyes light up. Before the tourists, shines the sight of thousands of Cape fur seals at the Cape Cross Seal Reserve – the biggest breeding colony on the mainland in Namibia. Flashes and the sound of zooming cameras fill the air of this cold winter morning. Happy, with a deep sense of feeling one with their surroundings, the tourist enjoy one of nature’s most beautiful gifts to man. 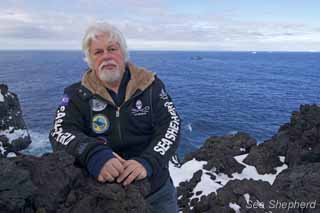 Captain Paul Watson, founder and president, Sea Shepherd Conservation SocietyThe one thing that I have been most proud of in my long career is the fact that after 35 years of interventions to defend marine life we have not caused a single injury to any person nor after some 350 voyages have I had any of my crew seriously injured. I am also proud of the fact that although we have been aggressively intervening against illegal whalers, sealers, dolphin killers, drift netters, trawlers, turtle killers and other ocean life-destroying enterprises, we have always done so within the boundaries of the law.

We have launched and carried out eight campaigns to oppose the Japanese whalers arrogantly operating in the Southern Ocean Whale Sanctuary. We have not caused a single injury to any of them nor have we caused any damage to their ships. The whalers on the other hand have shot at us, rammed our ships and completely destroyed one of them without any legal consequences whatsoever. What we have done is to cripple them financially by blocking their ability to kill whales and the achievement that I am most proud of is that due to our interventions some 4,000 whales would now be dead if not for the courageous efforts of my incredible crews.

Read more: We Will Not Back Down