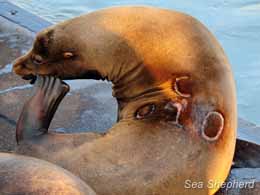 A Sea Lion painfully branded by government workers for monitoring. Photo: Erwin VermeulenSince taking on the issue of defending the sea lions at the Bonneville Dam on the Columbia River, Sea Shepherd has received some nasty hate mail and criticisms from some members of the public.

My favorites are the ones that say, “I supported you in defending the whales and the dolphins but I don’t support you with defending sea lions.”

The comments refer to our campaign with adjectives like  “misguided, stupid, irresponsible etc, etc.”

According to some of these critics Sea Shepherd does not care about the endangered salmon and sea lions are abundant and sea lions belong in the sea and not in the river and numerous other complaints from the advocates of lethal solutions to what they perceive as a problem.

Read more: The Damn Hunger Games on the Columbia River 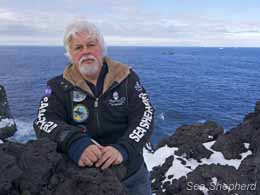 I remain a prisoner in Germany in a case that has become highly unusual, controversial and international.

On May 13th, 2012, I was arrested at Frankfurt airport in Germany because in October 2011, Costa Rica issued an order for my arrest and extradition for an incident that had taken place in 2002.

That incident involved a confrontation between the Sea Shepherd crew and a poaching vessel that we caught finning sharks in Guatemalan waters. We were given permission to intervene to stop the killing of the sharks by the Guatemalan government. No one was injured and there was no property damage but the Costa Rican poachers accused us of endangering their lives.

And 10 years later I found myself arrested in Germany because of this complaint.

Read more: The Law Takes Precedence Over Justice in Germany

Commentary by the Sea Shepherd Galapagos 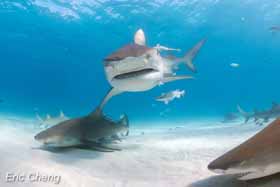 If created, the pioneer environmental authority will be a model for improving judicial response in marine protected areas- an issue raised by Sea Shepherd since the very beginning of its advocacy towards judicial specialization on environmental law.

After two years, this legal project, which aims at enforcing marine protection laws in courts of law, has proven just how important the role of the judicial system could be for the protection of marine species. We have learned that for laws on marine protection to effectively rule, specialized judges are needed just as much as specialized policemen and prosecutors. At present, Galapagos may be on the verge of becoming the first archipelago, on this side of the Pacific, to inaugurate such judicial specialization.

Read more: Advocating for Environmental Justice in the Pacific Ocean 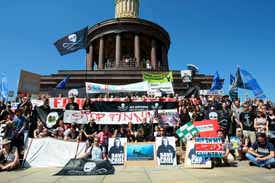 Captain Watson joins Sea Shepherd supporters in Berlin. Photo: Jan HolsteWith only a couple of hours sleep, Scott West and I caught a cab to Frankfurt airport at 0430 hours with a stop on the way for my first report of the day to the Frankfurt police station. We caught the 0730 flight to Berlin where we were met by Jean and Ulrike of Sea Shepherd Berlin and from there were driven straight to the Victory Statue plaza where Costa Rican President Laura Chinchilla Miranda of Costa Rica was due to pass by.

When we arrived there were already about a hundred people present and not long after, the Costa Rican President drove by on her way into the city. We clearly got her attention. We knew she would be coming back for her scheduled meeting with the German government at Schloss Bellevue, the residence of the German President. As we waited hundreds more people arrived all wearing Sea Shepherd shirts, some from Hamburg, Munich and Bremerhaven, Cologne and others from Australia, Netherlands, and even Costa Rica.

Read more: A Call From Berlin To Defend Our Oceans 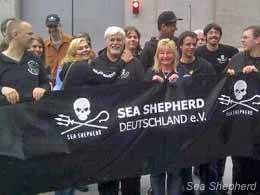 I would like to thank everyone around the world for the incredible support over the last week that I spent in a Frankfurt prison. It is greatly appreciated. The people of Sea Shepherd Germany have been wonderful and I have been happy to see so much support from supporters in Costa Rica and around the world also.

We have an excellent worldwide legal team working hard to resolve this legal issue. I am confident that this team will do the very best they can on every front involved with this case.

Although I have no reason to believe that the Costa Rican legal system would not give me a fair trial, my concern is not for the judicial system, but for the reality that the shark fin mafia of Costa Rica has a price on my head and a Costa Rican prison would provide an excellent opportunity for someone to exercise this lethal contract against me. We have cost the shark finners a great deal of money over the last two decades and they want their revenge. I would need absolute assurance that the Costa Rican authorities would not place me in the position to jeopardize my safety when I return to Costa Rica to prove my innocence in court.

In honor of the May 12th birthday of our cherished international chairman Farley Mowat, Captain Alex Cornelissen has written a tribute to the R/V Farley Mowat-Sea Shepherd’s Flagship from 2002-2008

It was four years ago during the 2008 Seal Campaign that I last stepped onboard Sea Shepherd’s flagship the Farley Mowat. First officer Peter Hammarstedt and myself had just been released from jail for the terrible crime of witnessing the Canadian seal hunt without having a permit. By law in Canada, a person must have a permit to witness and document the killing of seals. Our international chairman Mr. Farley Mowat generously paid our bail and in Sea Shepherd’s good pirate tradition, Captain Paul Watson paid the bail in coins. The Canadian authorities seized the ship off the coast of Newfoundland and it is currently moored in Nova Scotia. 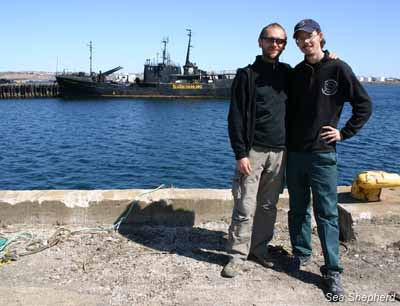 Goodbye to the Farley

The Case for Mass Murder in the Faeroe Islands

The Case for Mass Murder in the Faeroe Islands 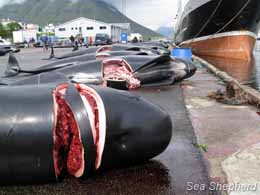 Photo: Peter HammarstedtThe Faeroese call their mass slaughter of Pilot whales the GRINDADRÁP. As a former student of linguistics I find this very enlightening. Grindehval means pilot whale in Faeroes. In Swedish it is Grindval; in Norwegian, Grindhval; Danish, Grindehval; Icelandic, Grindhvalur. In Faeroese the word gets shortened to Grind, which still means Pilot whales. It is the word “dráp” that got my attention.

Read more: The Case for Mass Murder in the Faeroe Islands

Takk Heri Joensen: Viking Vs Viking Over the Grind

Takk Heri Joensen: Viking Vs Viking Over the Grind

I would like to thank Heavy Metal musician Heri Joensen for having the courage and the conviction to debate me on the Animal Planet network on May 4th concerning the controversy of the slaughter of pilot whales in the Faeroe Islands. The horrifically brutal massacre of entire pods of defenseless pilot whales is so repugnant to the majority of people in the world that not one Faeroese politician, scientist, academic, or even a whaler volunteered to step forward in a public forum to defend their behavior. How do you defend the indefensible? You can’t, and they knew it, so they declined. However one man stood up for the Faeroes. Heri Joensen of the heavy metal band Tyr, a band that blends Nordic mythology with heavy metal in a uniquely Faeroese approach to music. Their Nordic rants on the virtues of the Nordic demigods have provoked some critics to label the group as fascists and even pro-Nazi, but I have not seen any evidence that they extol such hateful beliefs. 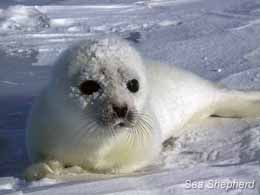 For years, the Canadian seal hunt has been a controversial issue among environmental and animal welfare groups. The focus of this controversy stems from the fact that baby harp seals are clubbed to death – some even skinned alive – for their pelts. I would challenge anyone who feels that this is a humane hunt to go and witness the massacre for themselves.

In 2008, while on board the Farley Mowat, Sea Shepherd did just that. For several weeks we followed sealing vessels and took video footage of grown men killing baby seals. I won’t go into the gory details, but the video we collected was littered with violations and heinous cruelty. I can only imagine what must happen when there are no witnesses or cameras.

Countering the Rhetoric of an Apostle of Whale Slaughter

Countering the Rhetoric of an Apostle of Whale Slaughter 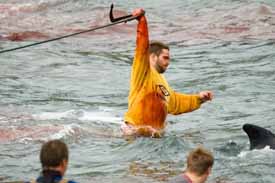 The "humane" way to kill a whale in the
Faeroe Islands.I have been asked to comment on this article written in 2009 by Elin Brimheim Heinesen. In this article Elin writes in defence of the Grind, the slaughter of the pilot whales in the Faeroe Islands.

I insert my comments where relevant:

Some people outside the Faroes think that Faroese people are senseless primitive murderous inbred drunken brutal beasts who once a year kill thousands of intelligent dolphins for fun as a 'coming of age ritual' just to leave most of the whales to rot on the beach and feeding the rest of the poisonous meat to their innocent children. As if the Faroese were the most ignorant and worst enemies of nature you can find on the face of the earth. Sadly many people believe these fantastic stories.

Read more: Countering the Rhetoric of an Apostle of Whale Slaughter