Emboldened by the silence of other nations and the lack of media coverage since the first whale of the season was slaughtered, Loftsson’s 22nd whale was an even more endangered and iconic endangered species of whale – an iconic Blue Whale!

Sea Shepherd crew monitoring the Hvalur hf whaling station overnight on the 7th July documented the return of Hvalur 8 with an endangered Blue whale alongside an endangered Fin whale on the vessels port side. The blue whale, the 22nd whale of the season was immediately recognised as being different in size, colouration and the reaction of the whaling crew as the whale was winched to the flencing area was notable as they immediately started climbing on the whale, having their photos taken on and next to the whale. Soon after CEO Kristján Loftsson appeared at the whaling station with a Japanese visitor. Loftsson stood at the head of the whale for a long time looking very concerned at the whale’s all black baleen before his crew set about butchering the massive whale. 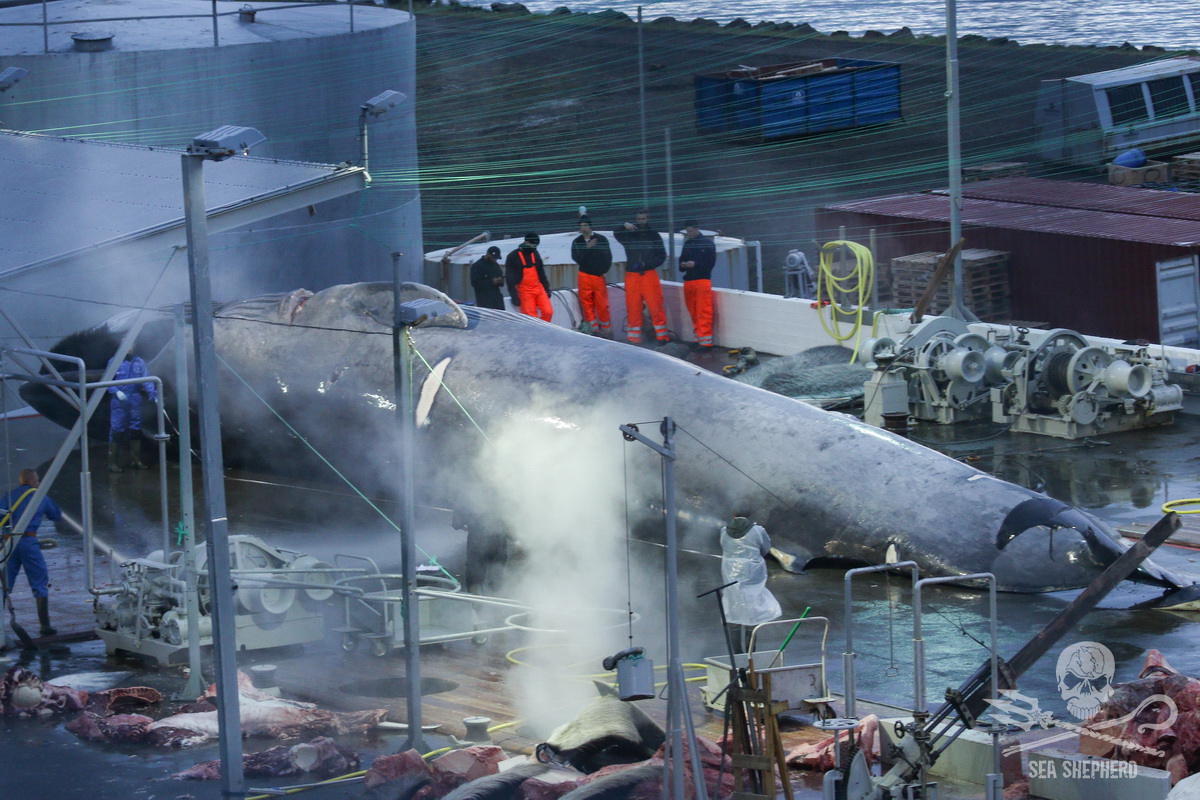 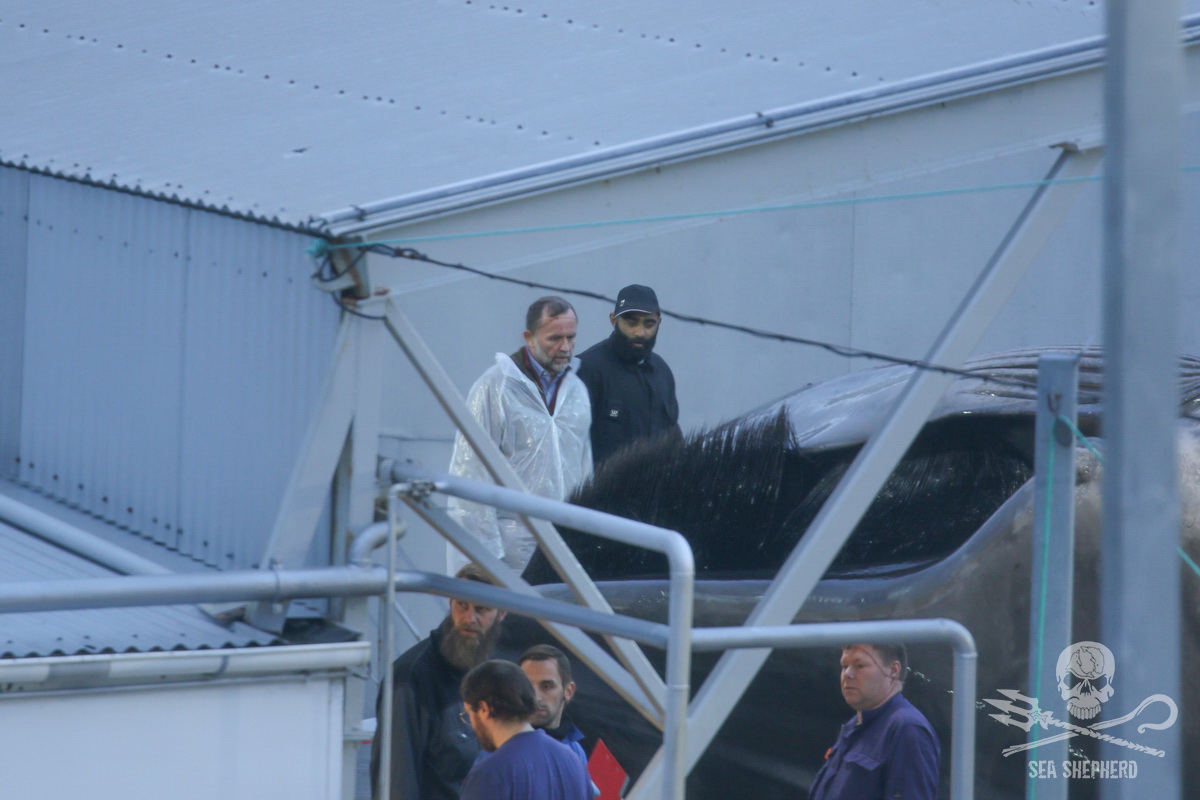 Loftsson’s concern was well founded. There had not been a Blue whale harpooned by anyone for almost forty years until this one. Yet the Hvalur hf whaling crew set about in the early hours of the morning butchering this whale until all it’s remains had vanished to the surrounding buildings or down waste chutes just as the previous 21 endangered Fin whales had been dealt with.

Sea Shepherd UK immediately sought the opinions of some of the world’s best whale scientists and conservationists sending our photographs and video taken by our crew. All 13 experts contacted concluded that by using the species identifying indicators of skin colour/pattern, baleen colour, dorsal fin shape, tail stock - the 22nd whale to be killed by Hvalur hf and landed on the 7th July at the whaling station in Hvalfjordur appeared to be an endangered Blue whale.

Sea Shepherd founder Captain Paul Watson has spent over a half a century defending whales. After viewing the photos and video taken by our team in Iceland, he said:
“I have viewed plenty of Blue whales on the surface, dived with them beneath the surface in West Australia, off the coast of California, in the Southern Ocean and in the waters off Newfoundland. I know a Blue whale when I see one and this whale slaughtered by Kristján Loftsson is a Blue whale”

Dr Richard Sears, blue whale researcher and founder at Mingan Island Cetacean Study (MICS) stated:
The side where the baleen show is the right side and a section of the baleen would be creme coloured to go along with the lower right white jaw typical of a fin whale, which I do not see here. The baleen is dark black, which is that of a blue.  The head shape looks like a blue, the body pigment appears to be more that of a blue, the ventral surface of the tail is grey and to me it is a blue. In a fin whale the tail would be white with a black border on the ventral surface. I can clearly see mottling, characteristic of a blue on the side that is exposed.  This whale to me looks more like a blue than a hybrid, but the only way to be certain is by getting a piece of skin, any piece, or blubber to test the DNA. 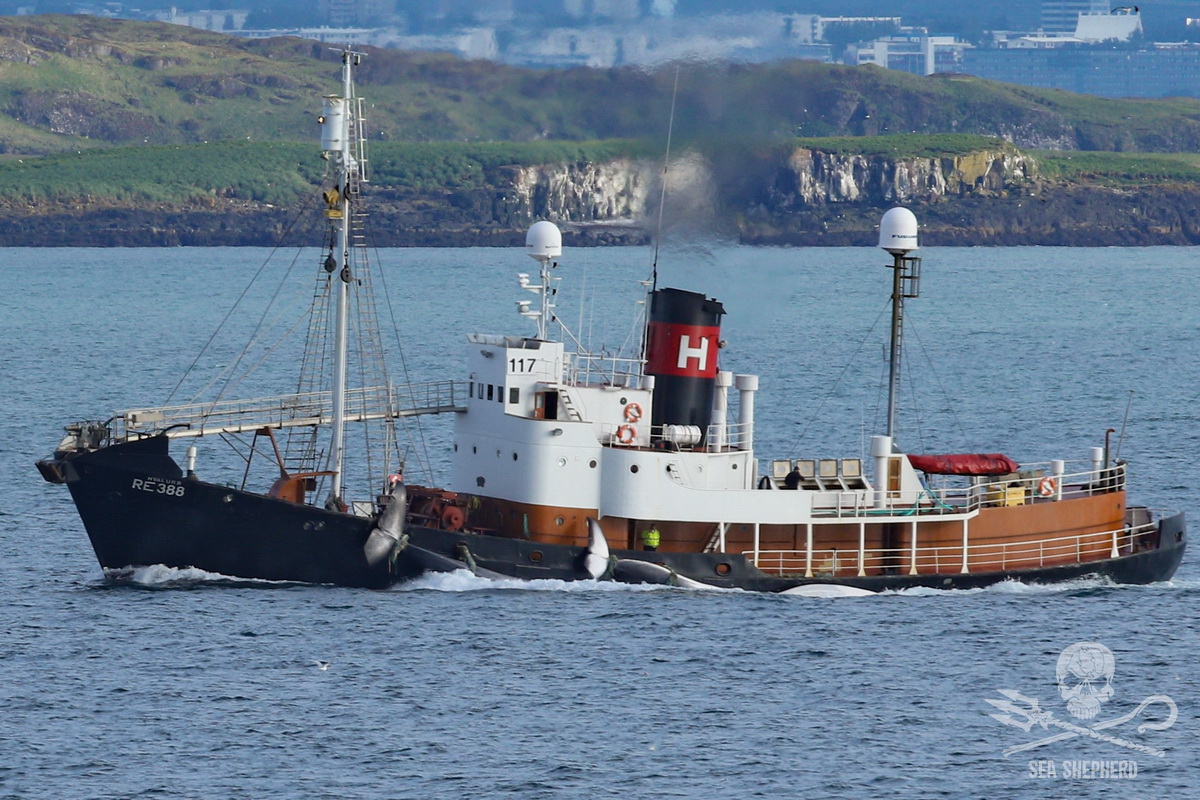 Dr Phillip Clapham from the NOAA Alaska Fisheries Science Centre and one of the world’s foremost Blue whale scientists stated:
"While I can't entirely rule out the possibility that this is a hybrid, I don't see any characteristics that would suggest that. From the photos, it has all the characteristics of a blue whale; given that - notably the coloration pattern - there is almost no possibility that an experienced observer would have misidentified it as anything else at sea"

Dr Phillip Clapham ‘hit the nail on the head’ in noting the complete absence of any signs of hybridisation. Whale 22 was the size of a Blue whale, looked like a Blue whale and looked nothing like a Fin whale - and should never have been harpooned.

By harpooning whale 22 and butchering it along with Fin whales, Hvalur hf demonstrated either a total lack of professionalism in whaling and whale identification – or the Hvalur hf crew were so confident in Loftsson’s influence in Iceland and immunity from prosecution that they knew they could get away with landing the whale during the early hours of the morning.

News of whale 22 and our crew’s photos and video were reported around the world prompting international calls for an investigation including from UK and Foreign government ministers. Under Icelandic law, the authorities should have shut down the whaling operations of Hvalur hf, or at least of Hvalur 8 pending the conclusion of the investigation. They did not, and while their testing was going on another 18 whales were killed and that indicates a bias in favor of Loftsson’s whaling operations or demonstrates the influence of Loftsson or others at this whaling company within Icelandic government departments.

On the 19th July the ‘Marine And Freshwater Research Insititute of Iceland’ (MFRI) came back with DNA analysis which claimed whale 22 was a hybrid stating:
"The genetic results confirm the preliminary assessment that the whale in question that was caught on July 7th was a hybrid of a fin whale father and a blue whale mother".

"I have to say I find this very difficult to believe given the appearance of this animal.  Irrespective of whether it is indeed a hybrid, it looks like a blue whale from stem to stern, and as such it should not have been killed” - and Dr Clapham was not alone in this opinion as other whale scientists voiced the same concerns.

Sea Shepherd Conservation Society fully rejects the findings of the Icelandic Marine and Freshwater Research Institute (MFRI) that 'whale 22' was a Hybrid. Also noted in MFRI’s brief report is that fact that Hvalur hf had already killed 4 ultra-rare Blue/Fin whale hybrids (according to MFRI analysis - but also without any permit to kill them) during previous years.

With the suspicion that Hvalur hf may be killing more hybrids or other Blue whales by deliberately or by accident, Sea Shepherd UK then issued the following standing reward offer: 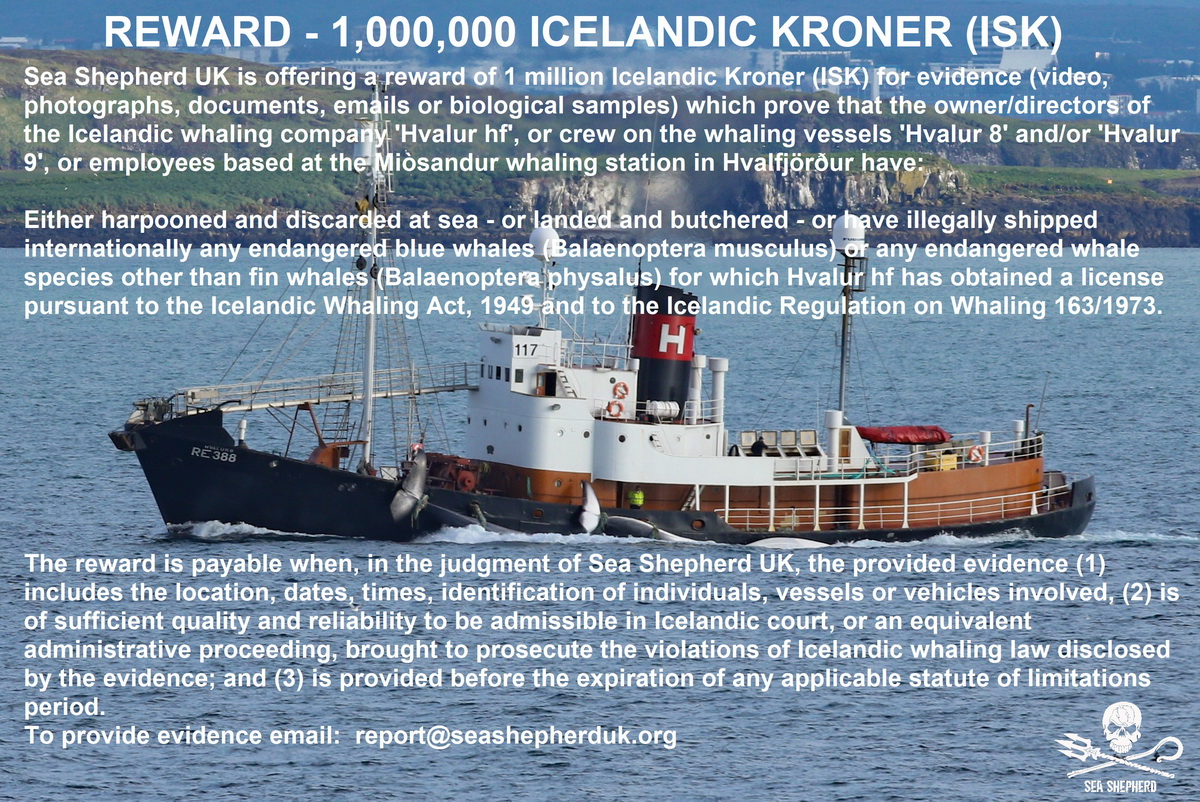 Early on the 24th August during the hours of darkness, Kristjan Loftsson's second whaling ship 'Hvalur 9' returned with the 98th and 99th whales of the 2018 season. Whale 98 was without doubt a Blue/Fin whale hybrid killed outside the terms of Hvalur hf’s permit.
With whale 98 being a hybrid, this meant that Loftsson’s company had harpooned 5 of the 6 Hybrid Blue/Fin whales verified by scientists since the 1980’s.

To make matters worse whale 99 which was brought in with it was a pregnant endangered Fin whale, the second whale that Sea Shepherd UK’s crew had videoed and photographed a dead fetus being cut out and being dragged away from it’s murdered mother.

With media again reporting on the two pregnant whales harpooned by Hvalur hf’s ships this year and using photos and video of their dead fetuses…Loftsson stunned the marine conservation community by instead of apologising or simply confirming these two whales were killed pregnant – instead decided to state to Icelandic media that they have already killed 11 pregnant fin whales in 2018. By the end of the whaling season Hvalur hf had killed around 21 pregnant Fin whales (TBC).