If you spot ghost fishing gear around the coast of the UK, please let us know right away! Visit our Ghost Fishing Gear Report page.
REPORT DEBRIS

Every year around 640,000 tonnes of fishing gear such as lines, nets and pots is lost or discarded into the oceans and this already shocking figure is increasing. These  discarded nets, lines and other fishing industry gear becomes known as ‘Ghost gear’ because of its ability to continue killing wildlife long after the fishing boats have left it behind.

Around the UK this lost and discarded fishing gear is the second largest source of marine debris with over 1250 kilometres of nets alone being lost in UK waters each year.

Over 150,00 seals and cetaceans (whales, dolphins and porpoises) are estimated to be killed annually by lost fishing gear along with thousands of sea birds, turtles and sharks. 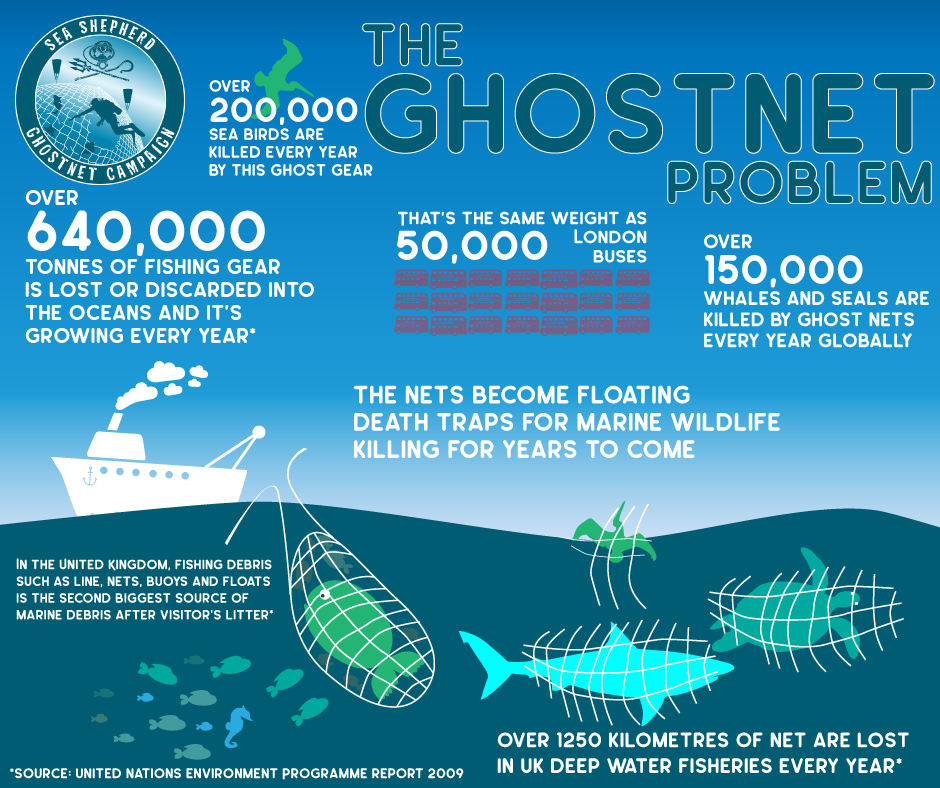 Why Is so much Fishing Gear lost or discarded?

There are many reasons that fishing gear is lost or discarded at sea:

1. Entanglement with other vessels gear, snagging on wrecks or on natural topography such as reefs and rocks

2. Fishing nets and lines breaking loose or having to be cut free for vessel safety reasons

4, Illegal discarding of unwanted fishing gear while at sea to avoid safe disposal costs back on shore

As part of a wider effort by Sea Shepherd to combat the issue of discarded fishing gear, Sea Shepherd UK launched its Ghostnet Campaign in January 2018 to concentrate on known problem areas around UK coastal waters but in 2020 our campaign is going global with our divers already being deployed to the waters of Bahrain.

The Ghostnet campaign utilises highly experienced volunteer divers and Sea Shepherd UK’s fast boats to survey UK waters looking for discarded fishing gear (DFG) and recover it for safe disposal or recycling. The divers are deployed to a potential or reported ghostgear site on one of Sea Shepherd UKʼs four Rigid-Hulled Inflatable Boats (RHIBs) where underwater 3D scanners pinpoint wrecks and sites to dive. Our crew look for wrecks located particularly near intensive netting and creel fishing areas as the equipment often becomes snagged on wrecks and rocks and we check nearby areas as the water currents move the ghostgear along the sea bed to other underwater features where it may become entangled.

The divers will survey the wreck to ensure that the net or pot can be removed safely and that it hasnʼt been down there so long as to have actually formed a habitat for marine life. Enormous care is taken not to damage the wrecks and we work in conjunction with the UKʼs Maritime Management Organisations (MMO), Natural England and Historic England who have approved our method statements and we obtain official permits whenever applicable.

Nets, lines and discarded creels are brought to the surface using lift bags which are attached to the ghost gear and then inflated to carefully lift them to the surface.

Often, we will have to revisit a wreck several times to remove all of the gear snagged on it. Once safely into the boat, the nets are then carefully disposed of on shore or taken for recycling by one of the innovative companies using them to manufacture clothes, footwear or even kayaks!

How can I get involved?

Sea Shepherd UK is always looking for experienced divers to assist with this campaign. Lifting gear from the sea bed is potentially very dangerous and therefore requires a certain level of competence. Divers should have complete a minimum of 100 coldwater dives, be qualified to the standard of at least Rescue Diver and have completed SSUKʼs unique Ghostnet Retrieval Course through our partner Scuba Diving International (SDi). 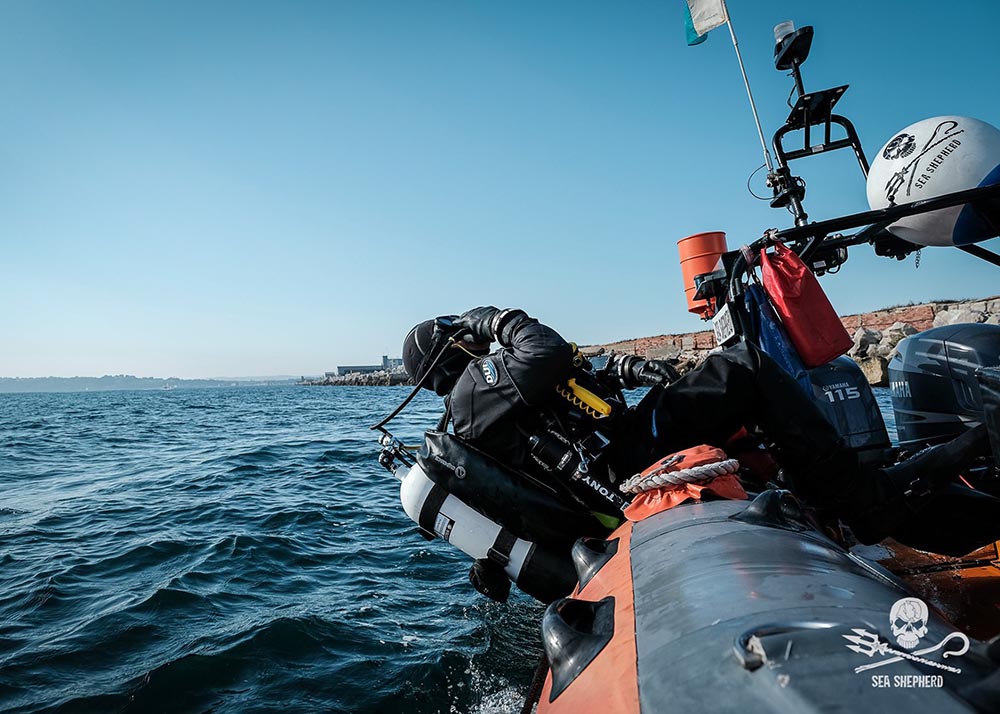 The course lasts two days and includes four dives with theory classes in between. Candidates need to be qualified to SDI Advanced Adventurer or equivalent level, be over 21 and able to show that they have carried out at least 100 logged dives.

The course has been created in conjunction with SDI to ensure that all divers remain as safe as possible in challenging conditions and that ghost gear is removed with no impact on the marine environment.

If you meet the minimum qualifications and would like to get involved in this excellent campaign, please contact us via email to: ghostnet@seashepherduk.org 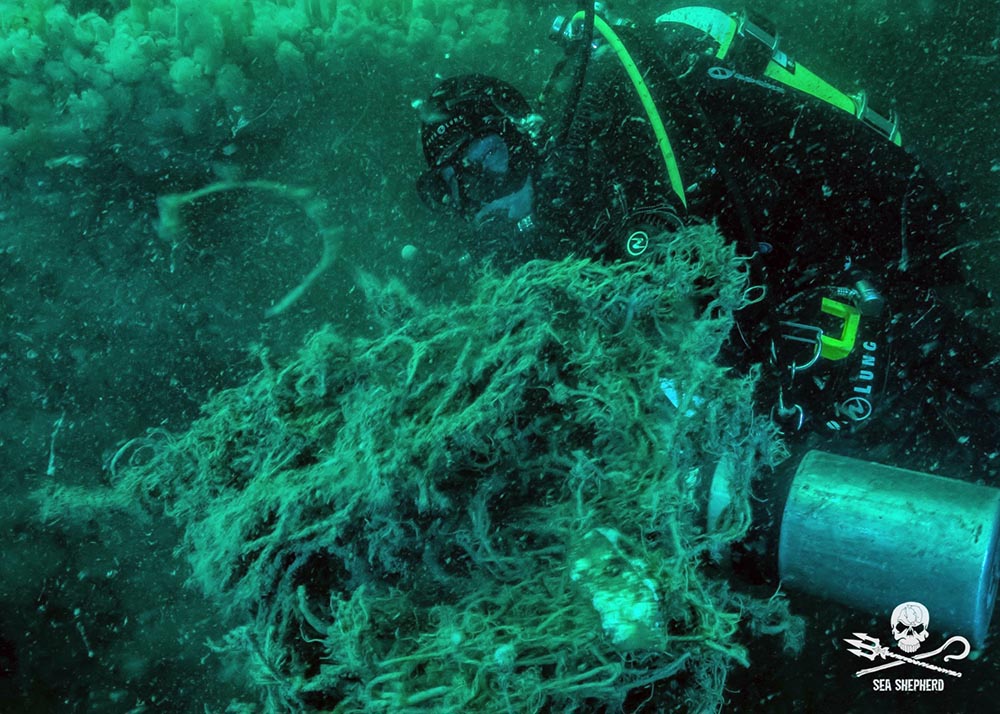