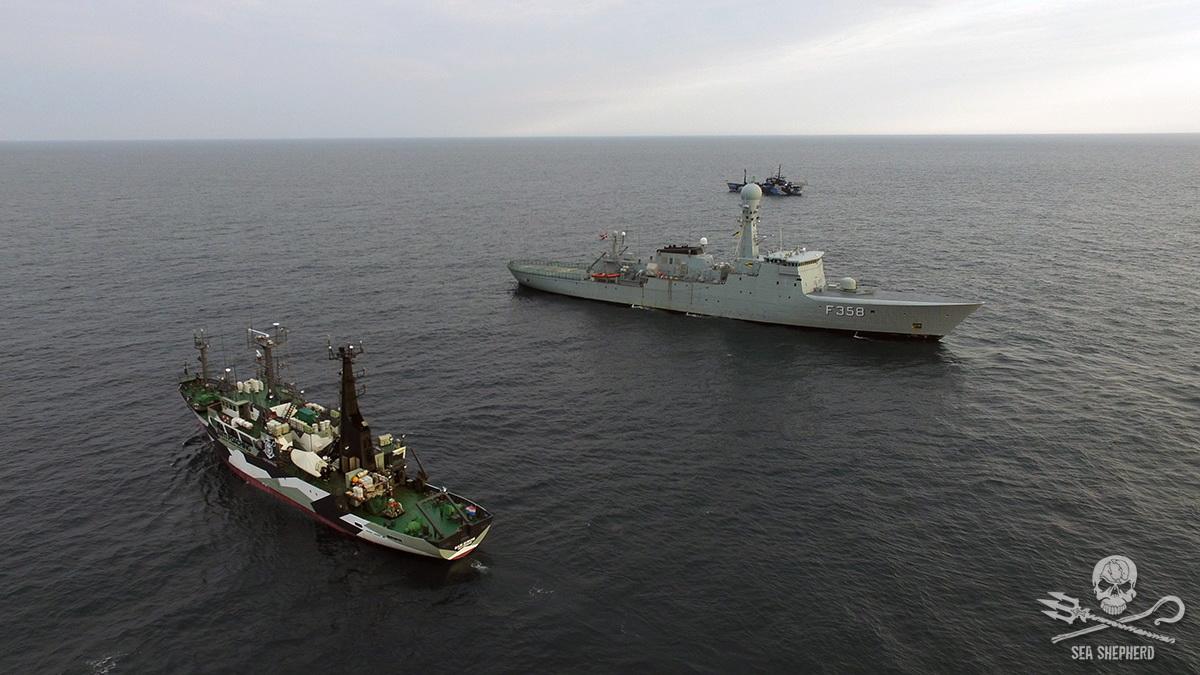 Danish naval vessel the Trident shadowing and blocking the Sea Shepherd vessels Sam Simon and Bob Barker from working to protect the pilot whales in the Faroe Islands in 2015 [Photo: Sea Shepherd Global]

Sea Shepherd entities around the world have been the leading opposition against the slaughter of pilot whales and dolphins in the Faroe Islands since the 1980’s. Sea Shepherd launched campaigns to oppose the Faroese grindadráp in 1983, 1985, 1986, 2000, 2011, 2014 and 2015 and following new Faroese laws targeting Sea Shepherd’s direct action tactics Sea Shepherd UK launched Operation Bloody Fjords with covert crew being sent to the islands in 2016, 2017, 2018 and now our crew are on the islands throughout the peak grindadráp months of 2019.

In 1985, The Sea Shepherd II sailed to the Faroe Islands for the first ship-based campaign. The Faroese authorities found Sea Shepherd's presence in the Harbour of Torshavn to be so provoking that they were willing to cut a deal. In return for Sea Shepherd departing the Faroes, the Fisheries Minister assured that the killing would be halted for the remainder of the grind season - it would be a victory without the need for further confrontation. As a result, approximately 500 pilot whales were spared from a gruesome death.

In 1986, The Sea Shepherd II returned to the Faroes, this time with a film crew from the British Broadcasting Corporation (BBC). The BBC produced the award-winning documentary “Black Harvest” using video documentation taken during the campaign aboard the Sea Shepherd flagship. During the 1986 campaign, Faroese gunboats pursued the Sea Shepherd II and engaged in a tear-gas attack in an unsuccessful attempt to seize the ship and arrest the crew. The resulting media coverage, coupled with the fact that several pilot whale pods were diverted from the killing bays, brought more pressure to bear on the Faroese authorities. Footage from the 1986 campaign was also used for the UK television documentary series ‘Defenders of Wildlife’ in an episode about Paul Watson and Sea Shepherd Conservation Society called ‘Ocean Warrior’ which aired in 1993.

In 2000, Sea Shepherd’s ship Ocean Warrior sailed to the Faroe Islands and the grindadrap hunts were featured heavily in the European media. Sea Shepherd brought economic pressure to bear against those companies still purchasing seafood from the Faroes and as a result more than 20,000 European retail outlets terminated their Faeroese fish contracts.

In July 2010, Sea Shepherd launched ‘Operation GrindStop’ and Captain Peter Hammarstedt went undercover to the Faroe Islands to gather evidence of the gruesome grindadráp hunt at the Faroe Islands second largest town of Klaksvik. This was followed two weeks later by Sea Shepherd’s Undercover Operative Sofia Jonsson documenting and exposing a grindadráp at Leynar. A massive, secret underwater pilot whale graveyard was first discovered during this campaign. Sea Shepherd also sent the vessel ‘Golfo Azzurro’ which completed a month of covert coastal surveillance patrols before being discovered, boarded and searched by Faroese police - then followed for the duration of the campaign by the Danish Navy.

In 2011, Sea Shepherd returned for Operation Ferocious Isles, with volunteer crew stationed on both land and sea. No pilot whales were killed while Sea Shepherd patrolled the islands. Sea Shepherd’s crew aboard the fast interceptor vessel Brigitte Bardot sent divers to investigate the underwater graveyard where pilot whale carcasses are discarded over the coastal cliffs from grindadráp hunts held at Vestmanna and Leynar. Operation Ferocious Isles was chronicled in a five-episode series on Animal Planet called “Whale Wars: Viking Shores” (2012).

On the 7th October 2014 a Danish Court hearing in the Faroe Islands ruled the seizure of the MV Spitfire was illegal and the boat was ordered returned to Sea Shepherd U.K. However, the Faroese prosecutor immediately appealed the court’s decision and the trial and appeal was not heard until 24th November 2016 when a Danish Judge in the Torshavn Courtroom ruled in favour of Sea Shepherd UK and MV Spitfire finally arrived back in Scotland on the 25th January 2017 after having been held for a total of 861 days by the Faroese police. 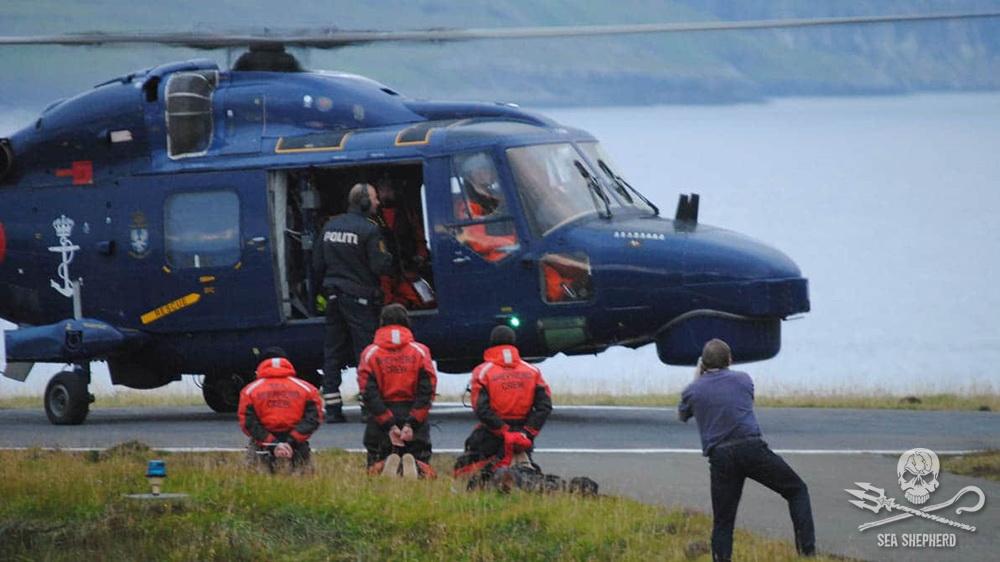 In June 2015, Sea Shepherd entities from around the world worked collaboratively to return to the Faroe Islands for Operation Sleppid Grindini 2015. With new Faroese laws being introduced by the Faroese Parliament - the saving the lives of cetaceans in the Faroes was considered a crime. It was now a crime to intervene against the hunts, a crime to fail to report the sightings of dolphins or pilot whales to the grind foremen or local Sheriffs, and a crime to divert pods away from the killing bays of the Faroe Islands.

However, during the three months of Operation Sleppid Grindini, the MV Brigitte Bardot, The MV Sam Simon, and MV Bob Barker, in collaboration with the Sea Shepherd’s land crew, successfully spotted and then escorted hundreds of pilot whales, white-sided dolphins, white-beaked dolphins and bottlenose dolphins past the many killing bays of the Faroe Islands without being detected by the Danish Navy or the Faroese. All of the pods were located relatively close to the islands’ shores and were at high risk of being spotted by locals and reported to authorities for inevitable slaughter.

During the 2015 campaign at total of twelve Sea Shepherd volunteers were arrested for interference with the killing and three Sea Shepherd small boats captured by the Danish Navy - Echo, Farley and the tender of the Brigitte Bardot (with Echo being seized by the Danish Warship HMDS Knud Rasmussen in an astonishingly fast semi-covert operation, no doubt at great expense to the Danish Taxpayer) to steal the Echo from Lerwick in Shetland and take it back to the Faroe islands- all in defiance of a High Court (Edinburgh) bill of suspension granted in favour of Sea Shepherd to prevent the boat being taken away from Scotland.

Sea Shepherd rapidly replaced all 3 small boats with an emergency appeal over just two weeks, sending a strong message to the Faroese that Sea Shepherd has a very dedicated international support base to back up our operations to end the grind.

In 2016, Shepherd UK placed two covert filming and drone teams in the Faroe Islands during the summer to secretly document the killing of pilot whales and dolphins in the grindadráp hunts and the close association between hunt bays and industrial fish farm sites around the islands.

In the summer of 2017, Sea Shepherd UK coordinated 18 crew members in 10 rotating teams based in six different Faroese towns covering 19 designated whaling bays. The campaign ran from 1st June to 31st during which our covert volunteer crews managed to extensively document and record nine separate grindadráp hunts and the transport of 6 whole pilot whales (sold for around 25,000 kroner each) from Klaksvik in the North East of the islands to the capital Torshavn in the South West to be processed and sold in the main SMS supermarket. After the last crew left the islands, Sea Shepherd then released a series of photo reports, videos and testimony from our teams which generated viral news reports around the world by media networks and in the printed press.

Images from the campaign and testimony from our crew can be viewed at: https://seashepherduk.myportfolio.com/faroe-islands-2017

In May 2018, Sea Shepherd UK stepped up the campaign and sent 38 crew from England, Scotland, France, Spain and Canada with embedded TV crews from South Korea and Italy as well as working with international media. Our crew documented, photographed and, for the first time by any international conservation group, managed to live-stream straight to the web a total of 11 grindadráp hunts while again also documenting the commercial sale of pilot whale meat in the Faroes and the killing of Fulmars in the North East of the Faroe Islands.

Our crew's live-streams, videos and photographs lead to hundreds of articles in the international media. Of particular note was the Hvalvik grindadráp of 210 Atlantic White Sided Dolphins on the 11th September which was documented and live-streamed by our crew. The hunt was disorganised, drawn out, totally inhumane and was a catastrophe for the Faroese in the International media causing debates and articles even in the Faroese media and calls, including from the former Faroese Prime Minister, to end the killing of Atlantic white sided dolphins entirely.

Photographs and information on the campaign can be found at: https://seashepherduk.myportfolio.com/faroe-islands-2018

Following the 2018 campaign, Sea Shepherd UK offered a conditional financial incentive to the Faroe Islands of One Million Euros (over 10 yearly instalments of 100,000 Euros) if zero cetaceans are hunted in the Faroe Islands - http://local.fo/sea-shepherd-offers-the-faroe-islands-one-million-euros-to-end-the-grindadrap/

The Faroese rejected the offer on the 1st January 2019 with a grindadráp of 70 pilot whales, and as a result for over 5 months in 2019 Sea Shepherd UK sent 19 experienced crew to the islands and worked with Chatterbox Media on filming for Stacey Dooley’s BBC3 investigatory programme into whaling, exposing the cruel and lengthy process used to kill the long fin pilot whales and white sided dolphins in Faroese waters: ‘Stacey Dooley investigates the controversial world of whale hunting’ [6 minute short] on BBC3 before the full documentary 'Stacey Dooley Investigates: The Whale Hunters' was shown internationally and made available worldwide on BBC iPlayer.

Sea Shepherd UK also collaborated with Sea Shepherd France and the acclaimed presenter Hugo Clement with his France 2 television crew witness a grindadrap hunt and broadcast this as an episode of his new series 'Sur Le Front' as well as working with an acclaimed Swiss Journalist who published the grindadrap hunt issue in five of the major printed newspapers. Sea Shepherd UK also contacted all sixteen cruise companies visiting the Faroe Islands to ask them to show their opposition to the hunting of hundreds of pilot whales and dolphins each year.

Sea Shepherd entities worldwide have been a leading voice for applying economic pressure on the Faroe Islands to end the grind by calling on compassionate people and companies to boycott Faroese seafood products and for Cruise Ship companies to abandon their visits to the Faroe Islands until the hunts are ended.

Images from the campaign and testimony from our crew can be viewed at: https://seashepherduk.myportfolio.com/operation-bloody-fjords-faroe-islands-2019

During 2020, our ground crew patrolled for over 2 months when COVID-19 travel restrictions were eventually lifted. Operation Bloody Fjords over recent years has generated many hundreds of international online and printed news articles, as well as featuring in radio and TV programs. However, the Danish Media rarely reported on the dolphin killings around the Faroe Islands, so Sea Shepherd UK and Sea Shepherd Scandinavia reached out to respected and recognised Danish activists to join the campaign and we were very pleased to have nine Danish activists last year in the Faroe Islands working alongside our UK volunteers.

There were no grindadrap hunts while our crews patrolled in August and September (typically the peak months for grindadrap hunts). However, three grindadrap hunts did happen during despite COVID lockdowns or physical distancing restrictions in the Faroes while pilot whales were killed during a tagging exercise and two small pods of Northern Bottlenose whales were killed after they stranded. The total of cetaceans killed in 2020 was 539 long finned pilot whales, 35 Atlantic white sided dolphins and 11 Northern bottlenose whales.

In 2021 our primarily Scandinavian and Faroese crew documented 12 grindadrap hunts:

The now infamous massacre of 1428 Atlantic White Sided Dolphins on September 12th was filmed by a courageous Faroese Sea Shepherd crewmember - and the resulting images and video caused international outrage. In that single hunt a total of 1428 Atlantic White-Sided Dolphins were driven 45km over about 5 hours by speed boats and jet-skis into the shallow waters at Skálabotnur in the Faroe Islands. Every single member of that pod was killed.

In 2022, Sea Shepherd’s determination to end the grindadrap now intensifies with a significantly upscaled 14th campaign year (our 7th consecutive year on the Faroe Islands).

For more information, or for press enquiries please contact: media@seashepherduk.org

You can also view photos and videos from Sea Shepherd UK’s campaigns including the last 4 years of Operation Bloody Fjords at: https://seashepherduk.myportfolio.com/

There is also a Facebook page for the campaign at: https://www.facebook.com/OpBloodyFjords/