Cruise Ship companies must stand up for dolphins and pilot whales!

Sea Shepherd calls on all Cruise Ship companies to stand up for dolphins and pilot whales!

International outcry will intensify in 2019 and Sea Shepherd now calls on all Cruise Ship companies to stop future visits to the Faroes Islands - until the Faroese end their barbaric grindadráp hunts.

In 2015, a major blow to the Faroese tourism industry occurred when two major German cruise-liner companies (AIDA and Hapag-Lloyd) announced that they have cancelled tours to the Faroe Islands. The cancellations were a response to the continued Faroese drive hunts of pilot whales and dolphins, known as the grindadráp.

Director for Environment and Community and Chief Sustainability Officer for AIDA, Dr Monika Griefahn, stated that the company has decided to re-route its cruises, and will now stop in Kirkwall on the Scottish Orkney islands as an alternative to the Faroe Islands port of Klaksvík. In a letter addressed to Sea Shepherd, Dr Griefahn stated:
“In the interest of our crew and our guests as well as for reasons for species protection, AIDA Cruises has decided to stop making port calls to the Faroe Islands until further notice.”

In response, the CEO of Sea Shepherd Global, Captain Alex Cornelissen said:
“While our crewmembers have been found guilty of defending pilot whales, the fight against the continued slaughter of cetaceans in the Faroe Islands is rapidly gaining momentum. I congratulate AIDA and Hapag-Lloyd for standing-up against this cruel and unnecessary slaughter, and for sending a clear message to Denmark and the Faroe Islands that the world will no longer tolerate this bloody ‘tradition’.” 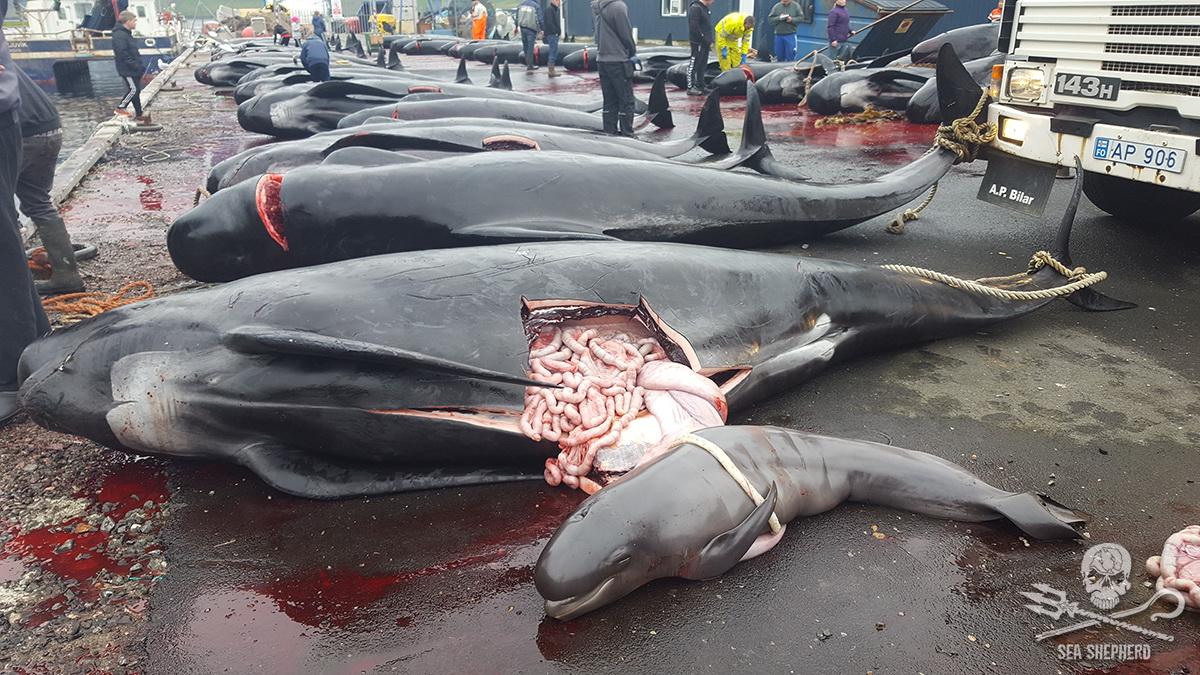 A mother pilot whale and her dead unborn fetus at Hvannasund on the 5th July 2017 [Photo: Sea Shepherd UK]

Sea Shepherd has been leading opposition to the grindadráp since the early 1980s and is currently in the Faroe Islands for the organization’s eleventh year with ‘Operation Bloody Fjords 2019’.

As part of the campaign Sea Shepherd UK is appealing for cruise ship companies/operators and agents to publicly voice their opposition to the killing of around 850 pilot whales and dolphins each year by the Faroese. Sea Shepherd requests that the companies declare that the Faroes Islands will no longer be a port of call or destination of their ships until such times as the grindadráp is consigned to history!

Despite the bold move by the two German cruise companies in 2015  - the number of cruise ships visiting the Faroes has increased dramatically in recent years due to primarily a huge drive by ‘Visit Faroe Islands’, the public face of the Faroe Islands' official tourist board organised under the Ministry of Trade and Industry.

Sea Shepherd is now calling on the following cruise ship operators, all of which have ships calling at Faroese ports in 2019 - to show their opposition to the hunting of hundreds of small cetaceans by removing the Faroe Islands from their future cruise ship itineraries:

These 16 companies account for a total of 38 confirmed port calls by cruise ships in the Faroe Islands during 2019. 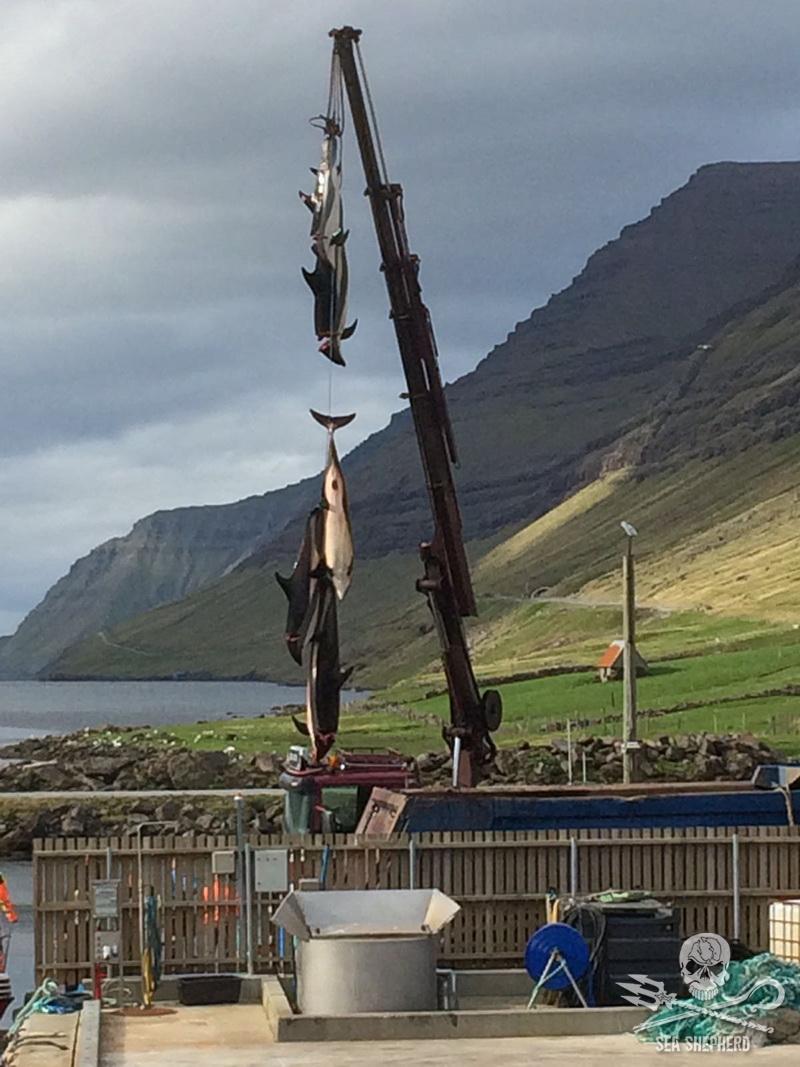 Atlantic White Sided Dolphins being lifted by a crane at Hvannasund on the 16th August 2018 [Photo: Sea Shepherd UK]The 38 ship visits in 2019 potentially can see up to 38,254 passengers setting foot on the Faroe islands - a highly lucrative industry for the Faroese ports servicing the vessels, and for the Faroe Islands generally by the huge income from the tourists visiting shops and restaurants.

Sea Shepherd also appeals to the cruise ship passengers who do set foot in the Faroes – to look, take photographs – but to not spend any money on the Faroe Islands in their own personal protest against the grindadráp.

The aim of this Call to Action is simple - to significantly impact both tourist numbers, cruise ship visits and have a significant impact on the economy and reputation of the Faroes years to come - until the Faroese give up the grindadráp!

Or ‘Shop to Support’ our charity at our UK based webstore:
https://seashepherduktrading.org

For more information, or for press enquiries - please contact: media@seashepherduk.org