The ‘Grindadráp’- Dolphin hunts in the Faroe Islands 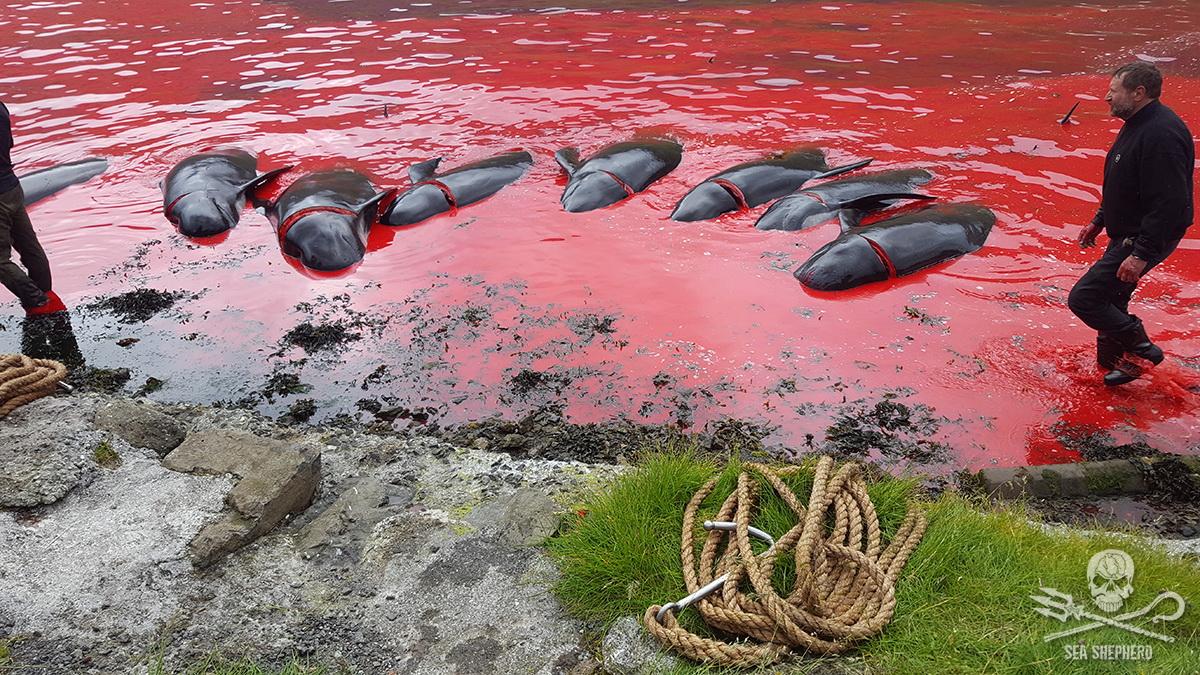 Every year in the Faroe Islands, an archipelago which is part of the kingdom of Denmark situated just 230 miles north-west of mainland Scotland - around 850 small cetaceans, primarily long finned pilot whales and Atlantic white-sided dolphins are massacred in drive hunts called ‘grindadráp’ in Faroese.

The grindadráp (or ‘grind’ as the hunts are commonly called) can happen at any time at any one of the 26 designated killing bays around the islands, with the majority of the hunts statistically occurring between July and September. The grindadráp unlike most regulated (yet still unnecessary) hunts has no season, no quota and the Faroese rarely do not authorize a hunt when a pod is spotted, unless the weather or sea conditions are too hazardous for their boats.

The cruelty of the Grindadráp

After a pod is located and a hunt is authorised, The Faroese drive the pod using sports/recreational boats, fishing boats, jet-skis and any other watercraft they have available, including often utilising the small boats launched from the Faroese Coastguard vessel ‘Brimil’.

For many miles and over several hours, the Faroese use a ‘wall of sound’ from their boat engines to force the increasingly stressed and panicking pod towards the nearest designated killing bay and into its shallow waters where waiting Faroese men rush into the water to kill the animals or drag them further ashore with ropes and a blásturongul (a type of gaff-hook rammed into the whale’s blowhole) before the men attempt to sever the whale’s spinal cord with a mønustingari (a spinal lance resembling a short spear) and then use a grindaknívur (traditional grind hunt knife) to cut through the whale’s neck.

The killing of the dolphins and pilot whales is rarely as quick as Faroese government and media propaganda makes out.  Grindadráp hunts can turn into drawn-out, often disorganised massacres. The pilot whales and dolphins can be killed over long periods in front of their relatives while beached on sand, rocks or just struggling in shallow water with Faroese boats blocking their escape - until not a single pilot whale or dolphin is left alive.

Jústines Olsen, the Senior Veterinarian at the Faroe Veterinary Service calculated the average duration of killing during grindadráp hunts at 12.7 minutes, and Sea Shepherd crew often record killing at grindadrap taking over 20 minutes.

The Faroese second largest town of Klaksvik was the site of the infamous grind on 19 July 2010. That was a grind which went horribly wrong - even by Faroese standards. A total of 228 pilot whales were driven onto a beach large enough only for around 100 whales, and there were too few men waiting to kill them. The whales were left thrashing around on the beach, on rocks and everywhere in the bay, prolonging the suffering for many whales as their family members were slowly killed over several hours around them.

Every member of the pod is killed including pregnant mothers, juveniles and weaning calves. None are ever spared by the Faroese.

The Faroese are without mercy. Every member of the pod is killed including pregnant mothers, juveniles and weaning calves. None are ever spared from the Faroese’ knives. The grindadráp would be totally illegal under European Union legislation, because in the EU (including the kingdom of Denmark, of which the Faroe Islands is a part) it is illegal to kill, harass, stress, chase or touch any small cetaceans. Despite the Kingdom of Denmark being in the EU, the Faroe Islands is not, although the islands are within Europe and benefit substantially from subsidies from Denmark and free trade agreements with the EU.

Sea Shepherd volunteers have often witnessed the ‘sport’ of the grind, with lots of Faroese men rushing to the killing bay. There is cheering, laughter and there can be no denying the bizarre festival-like atmosphere among men armed with lances, knives, ropes, and hooks. The younger Faroese men are often seen smiling and posing for photographs while drenched in the blood of the whales or dolphins they have killed in an outrageous display of disrespect for the animals whose lives they have taken. Today, the Faroese grindadráp is continued not out of necessity for the islander’s survival as in Viking times, but instead is continued under misguided sense of national pride in this communal bloodbath. The reality is that a modern grindadráp is little more than a community sport providing contaminated free meat for a wealthy European island population which simply does not need it.

Arguments for continuing such a needless and inhumane hunt to maintain a Faroese sense of ‘cultural history’ are ridiculous. Previous claims that the Faroese also think they need to “maintain the killing of hundreds of pilot whales each year to maintain community cohesion” are astonishing. If this is really the case, then the Faroe Islands government need to take a hard look at what is wrong in its communities. If we all used such excuses to continue ‘old traditions’, then many other ancient barbaric practices would still be happening today. The last similar drive hunts of small cetaceans that took place in the UK were in Shetland, Scotland - But those drive hunts ended a century ago.

The Increasingly Commercial Nature of the Grindadráp 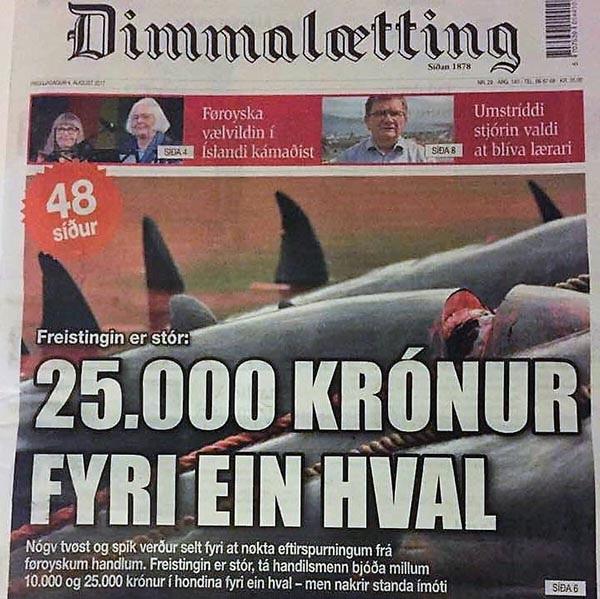 Faroese newspaper ‘Dimmalaetting’ front page article 4th August 2017 stating that whole Pilot whales were being sold to supermarkets for 25,000 Kronur each [Photo: Sea Shepherd UK]t is true that a large part of the resulting pilot-whale meat and blubber is divided up among those who take part in the hunt, and then divided up to the local community. However, pilot whale meat and blubber also ends up being sold in various Faroese stores, in the Miklagarður supermarket in the SMS Shopping Centre in Torshavn and the outdoor market at the capital’s harbour - and tourists can purchase and eat pilot whale at establishments such as the Hotel Hafnia’s Kafe Kaspar in Tórshavn, the Marco Polo restaurant, Bowlinghøllin á Hálsi and the Michelin starred KOKS restaurant and at many more establishments.

There has been for many years now, a commercial element to this hunt despite the repeated claims of the Faroese government. On the 4th August 2017, the Faroese newspaper ‘Dimmalaetting’ stated that whole Pilot whales were being sold to supermarkets for 25,000 Kronur each.

Additional profit can always be made by the Faroese selling the teeth of the pilot whales on cord or chain necklaces to naive foreign tourists who often illegally import to their home country as souvenirs. 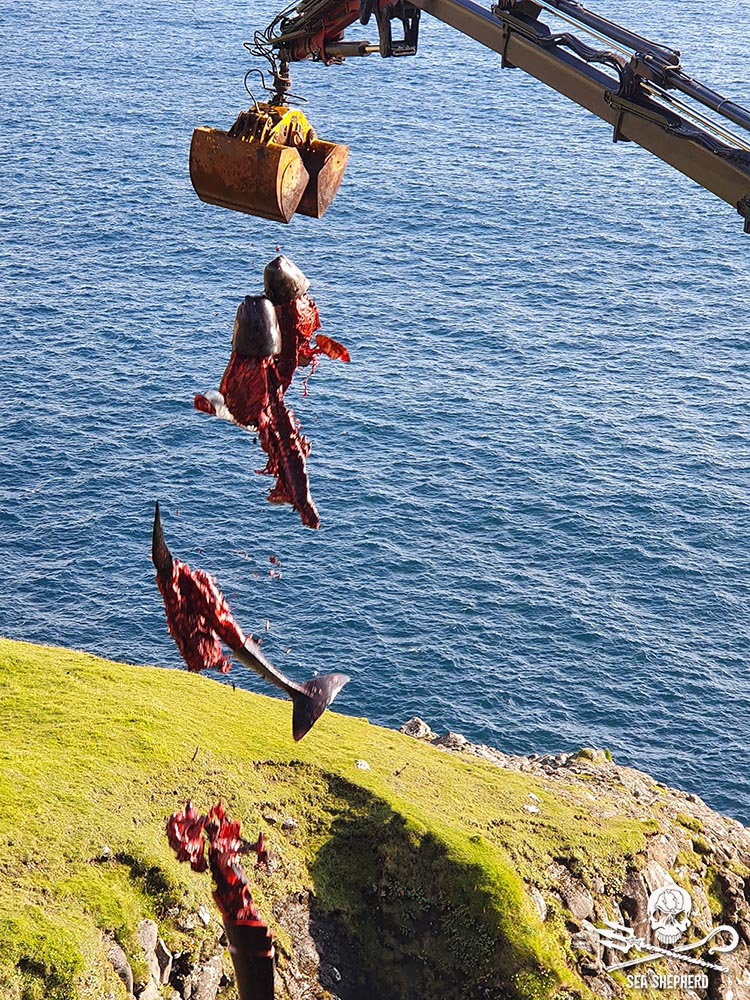 Pilot whales killed the previous day at Vestmanna being dumped into the sea from a cliffside road near Leynar, 28th August 2019 [Photo – Sea Shepherd UK]Despite some inaccurate claims in newspapers in recent years, the Faroese do not depend on pilot whale and dolphin meat to survive. The Faroe Islands is only 230 or so miles from mainland Scotland and is supplied by sea and air with products from all over the world. In the Miklagarður store in the SMS centre (Tórshavn) which opened in 1977 you can get almost anything including python, zebra, crocodile, buffalo as well as Norwegian minke whale and Faroese pilot whale (minus any contamination warnings of course). In fact, there are one or two stores in almost every Faroese town of a thousand people or more. Midvagur for example has 2 different stores serving only 1080 people, with another store serving just 800 people in adjoining Sandavágur.

Led by its lucrative fishing and fish farming industries the Faroese economy has prospered. The Faroe islanders per capita GDP is comparable with any Scandinavian country and current unemployment is just 1.7% with almost zero poverty.  The most recent statistics show that its gross domestic product per capita (a country's economic output per person) totalled $58,950 (£45,102) in 2017. That is almost as high as the US ($59,958), and more than both the UK ($40,361) and France ($40,109). The Faroe Islands also receives an annual subsidy from Denmark equivalent to $100m. The grindadrap could never be called subsistence whaling, it simply is not needed to feed anyone.

Health Risks to the Faroese and Tourists of the ‘Grind’

Why any Faroese person (or tourist) would choose to eat pilot whales or dolphins today is a mystery given the significant and proven risks to their health. As the Danish food critic Trine Lai rightly points out on her recent food blog about KOKS restaurant on the Faroes: “The pilot whale is in fact not considered human food anymore, because it is full of mercury and other heavy metals from the pollution of the Atlantic Ocean”.

This is Scientific fact, peer reviewed and published in the ‘New Scientist’ in 2008 in a research article by the Faroe Islands chief medical officers Pál Weihe and Høgni Debes Joensen who concluded that the pilot whale meat was unsafe for human consumption because of high mercury content. The two scientists detailed also in their research how mercury poisoning could trigger a range of ailments including fetal neural development, high blood pressure, circulatory problems, and possible infertility (all too common symptoms observed in the small Faroese population).

An often-repeated Faroese claim is that:

“Long finned pilot whales are not endangered and the harvest, averaging out at 850 per year, is ‘sustainable’, according to the Convention on the Conservation of Migratory Species of Wild Animals”

This statement is entirely false (as ASCOBANS / CMS - Conservation of Migratory Species of Wild Animals convention secretariat staff can verify with a simple phone call.

Faroese pilot whale hunts are NOT designated ‘sustainable’ under ASCOBANS due both to lack of accurate pilot whale population data and the ocean areas covered by the treaty in regard to Appendix II species. The grindadrap has not been declared 'sustainable' by the CMS for the same reasons.

Furthermore, in 2018 the Faroese ex-prime minister revealed publicly that there has never even been a sustainability study into the hunting of Atlantic White sided dolphins (or any other dolphin species) in Faroese waters.

That said, Sea Shepherd UK is not interested in getting into arguments about ‘sustainability’. The grindadrap is simply cruel - both the harassment of the drive, and the inhumane killing. For those reason the hunts should be stopped immediately. Sustainability (or not) is a debate to be had only if something is already ethical and humane in modern society.

The grindadráp a barbaric relic of a bygone age. A needless hunt of hundreds of pilot whales and dolphins which should have ended a century ago…

The grindadráp a barbaric relic of a bygone age. A needless hunt of hundreds of pilot whales and dolphins which should have ended a century ago, a tradition that poisons not only the Faroese people, but also tourists while fully sanctioned by the Faroese government, defended by the Kingdom of Denmark, it’s Navy, Police and Court system, and maintained only under ludicrous arguments of ‘history and culture’. 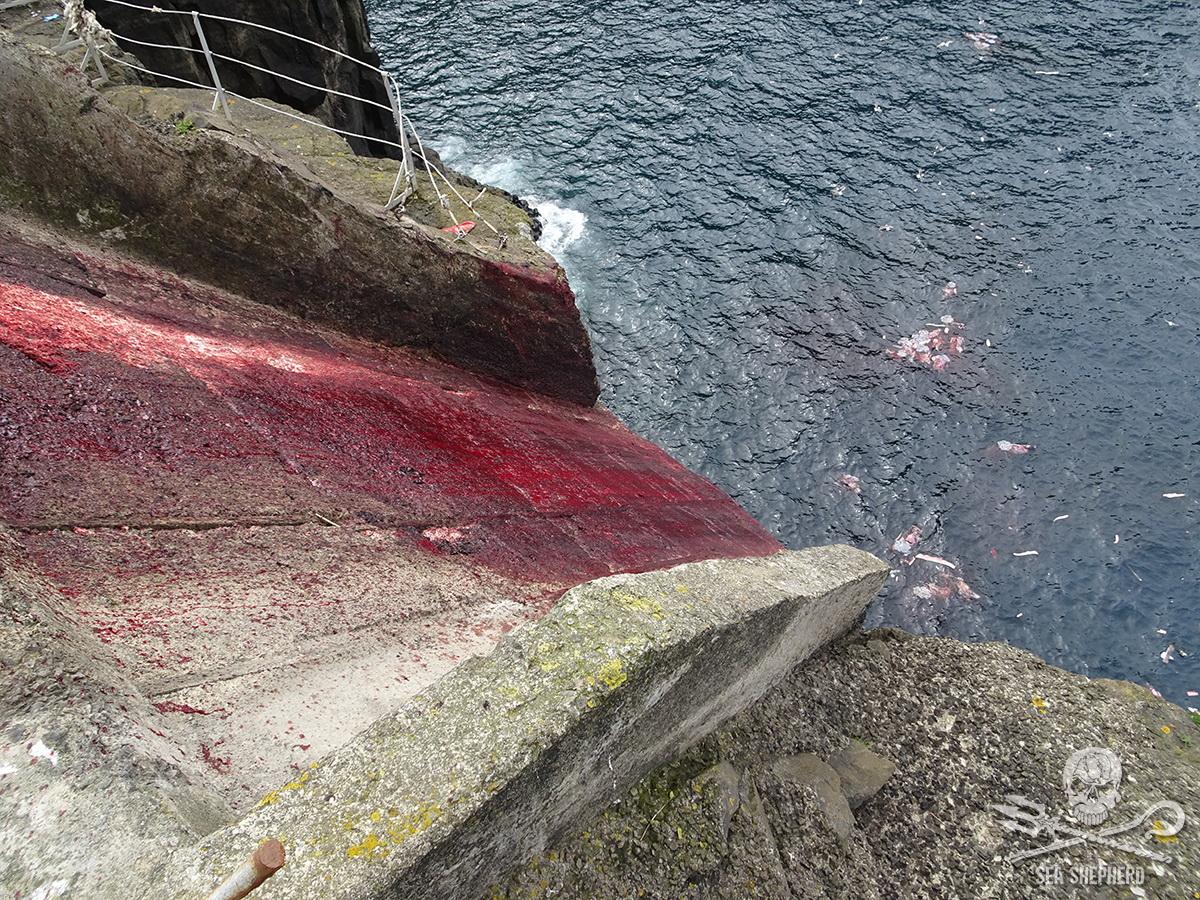 A concrete chute over a cliff at Hvalba photographed by a tourist on the 27th May 2019 drenched in blood with sections of pilot whales seen submerged and floating below. Many of these clifftop chutes are used around the Faroe Islands to discard whale and dolphin body parts  into the sea [Photo rights granted to Sea Shepherd]

You can also view photos and videos from Sea Shepherd UK’s campaigns including the last 4 years of Operation Bloody Fjords at: https://seashepherduk.myportfolio.com/

There is also a Facebook page for the campaign at: https://www.facebook.com/OpBloodyFjords/